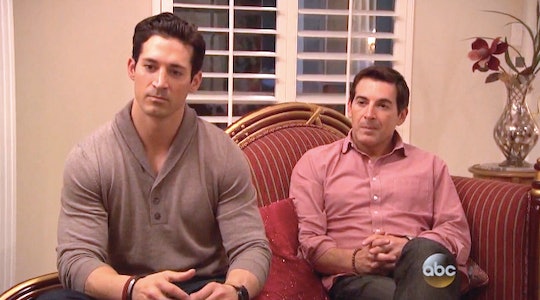 Were JoJo's Brothers Right About 'Bachelor' Ben? Their Overprotective Attitudes Might Be Doing More Harm Than Good

By far, the most difficult family of this week's hometown visits on The Bachelor, was JoJo's clan in Dallas. While previews showed that a little drama was set to unfold at the Fletcher household during JoJo's date, no one expected it to go as far as it did, with the contestants brother grilling Ben on his stint on the show and treatment of the women. But were JoJo's brothers right about Ben and his intentions, or were they simply being too harsh?

Ben's arrival at JoJo's home was preceded by plenty of chaos when a letter and roses arrived from JoJo's ex, Chad, who was making a play to get her back (undoubtedly straining the visit from the get-go). JoJo called the former flame in question on the phone and firmly told him it was over for good, before explaining the whole situation to a very understanding Ben.

Unfortunately, the trip continued to be rocky for the couple when Ben met her two "protective" brothers. After JoJo explained to them how the dating process works on the show, and confided that she was falling in love with Ben in spite of only having two one-on-one dates, her brothers dug into the "only two dates" detail and shut JoJo down every time she tried to explain herself.

JoJo tried to explain how she also gets time alone on group dates, but her brother cut her off, saying, "You just said you've only been on two dates with him." And he wouldn't give her the chance to clarify.

"I'm just talking to you as your brother because I love you and I just want you to keep your heart guarded," he unhelpfully advised. "My read is he's not as emotionally invested in it as you are."

Later with Ben, JoJo's brother called him out in front of the entire family, saying, "To see our sister get a little more emotional than I would like...she's obviously starting to have real emotional feelings but I don't get the same read [from you]."

It's painfully obvious that JoJo's brothers are not the most feminist source of emotional support for her. First of all, there's nothing wrong with having emotions, and if JoJo's brothers are uncomfortable with the amount of emotion their sister is displaying, then that's their shortcoming to work through — not hers, and definitely not Ben's. JoJo can feel and express as many complex emotions about Ben as she wants to; the need she was clearly communicating to her family was support to help her be more vulnerable with him.

Not only did her brothers confirm her fears, using these bullshit "reads" as trumped up evidence against Ben, but they also inflated her fears to a ridiculous degree, making poor JoJo feel even more uncertain and paranoid, and actively discouraging her from taking a healthy risk. There was a way to validate her feelings of fear while also meeting her needs, but JoJo's brothers skipped straight to attacking Ben to do what they thought was best for JoJo, instead of empowering JoJo to do what's best for herself.

Second of all, JoJo obviously has a clear idea of how she experiences her relationship with Ben, and it's the worst kind of gaslighting to suggest that those very real experiences are all in her head, just because she hasn't had what they deem to be an acceptable amount of time with Ben.

Monica Parikh, owner of the blog School of Love NYC, and her colleague Aimee Hartstein, a licensed clinical social worker, spoke to Bustle about the very real abuse tactic of gaslighting, which looks a lot like what JoJo's brothers were doing to her. Explained Parikh and Hartstein,

There is no rationalizing, arguing, or stating your case. The perpetrator is not interested in your reality. They are only interested in taking over your reality and having you completely dependent on what they tell you and what they want you to do.

JoJo's brothers masked their invalidating, patronizing comments as brotherly concern, but even Ben saw how ridiculous their reasoning was.

"Am I that evil?" he asked in a cutaway interview, "Where I have planned this all out, where I just want to get their sister to the point where she was falling for me and then break her heart on purpose? Just because I like watching people get hurt?"

JoJo's brothers at one point even accused Ben of "being coached on his answers" to the family, which would serve no one in the relationship.

JoJo's brothers might think they're just watching out for her, but they seem to be the ones perpetrating the most harm. She was clearly reaching out to them for help and they crushed her with an arrogant and paternalistic power play. JoJo is a grown ass woman who has lived her own experiences. She is the expert on them, not her family members. Furthermore, she deserves to be believed by the people who claim to love her so much that they'd rather trust their own, made-up worst-case-scenario judgements.

Finally, it's clear that her brothers are uncomfortable with emotions in general, as they cruelly humiliated JoJo, proclaiming that she was being "more emotional than they would have liked." Women are constantly being made to feel like they're "too much" emotionally, and it's the job of the people who love them to give them a safe, supportive space to express themselves, where they know they'll be heard.

If anything, meeting JoJo's brothers this week made us feel sorry for how difficult growing up in that house must have been for her. Luckily, it seems like Ben is doing a better job of recognizing that JoJo is her own person than her own family is doing.