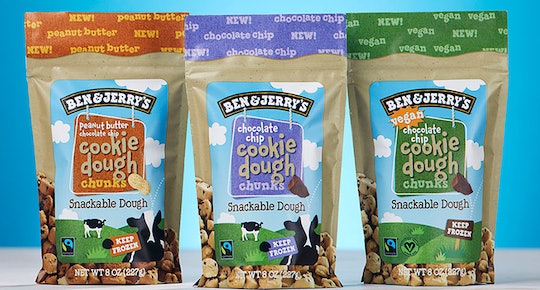 Sometimes it's difficult to resist the seductive pull of convenient packaging plus delicious food items all rolled in one. And when I mean sometimes, I mean it's impossible. Do you know who knows this already? Ben & Jerry's, of course. After they already sucked us all in with their delicious ice cream in personal-sized cartons (to me they're personal-sized, anyhow), now they've come up with something new and it's brilliant. Ben & Jerry's new cookie dough snack packs are nothing short of the best idea in snacks right now and I should know because all I ever want to do is eat snacks.

The Vermont-based ice cream giant is about to give us all what we've been wanting for a long time now: cookie dough ice cream without all that ice cream getting in the way. Just imagine chunks of frozen cookie dough you can pop in your mouth straight out of the freezer and now you have a vague idea of what Ben and Jerry's is getting set to deliver to their customers. Do you remember all of those times you really wanted to eat raw cookie dough but your mom slapped your hand away because she didn't want you to get sick with bacteria? I mean, she had this report from the CDC to back her up but still... harsh.

Guess what — these Ben & Jerry's Cookie Dough Chunks won't make you sick, so your mom can't say anything about it.

It all started last year when Ben & Jerry's answered the desperate call of cookie dough lovers and introduced half-pound bags featuring eight balls of cookie dough made with pasteurized eggs and heat-treated flour to make them safe for consumption.

As the company explained in a statement, as per Thrillist, "Fans have been asking for ‘just the chunks’ for a while now. We’re bringing cookie dough to our Vermont shops to start. If it does well, it may be available online and in other distribution channels later this year."

Apparently the people of Vermont (the only state where the bags of cookie dough were sold) liked them well enough that now Ben & Jerry's is getting ready to launch three flavors of Ben & Jerry's Cookie Dough Chunks for the entire country to enjoy.

This is a pretty genius idea for a snack and I just had another one to take it to the next level: Buy cookie dough ice cream and then add in the extra cookie dough chunks for a better ice cream to cookie dough ratio. You're welcome.