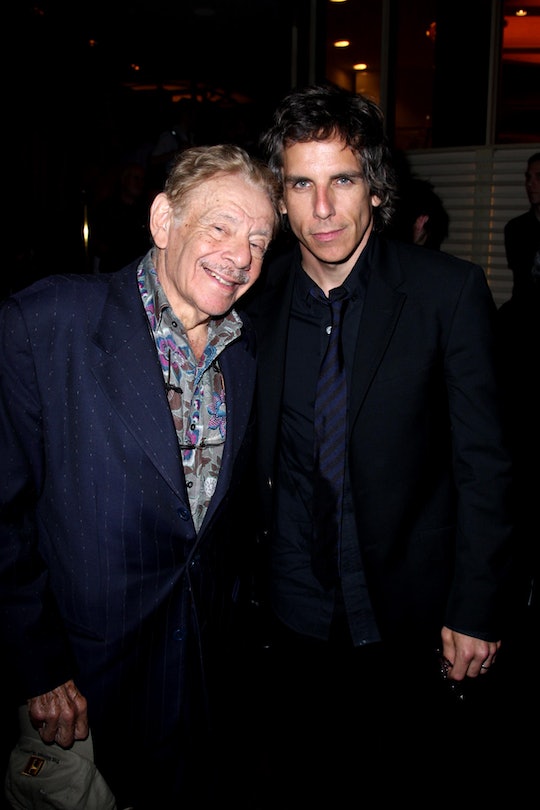 If we're being honest, we would all admit that sitting through our kids' school plays is not always, shall I say, amazing? But we're not brutally honest, of course, unless you're a seasoned comedian. In a recent interview on The Tonight Show, Ben Stiller shared a memory about his dad Jerry Stiller watching a school play and while it was perhaps not the two-thumbs up he was expecting, it was a precious moment nonetheless.

Jerry Stiller died of natural causes at the age of 92 earlier on May 11 after more than six decades in the entertainment industry. First as a comedy duo with his wife Anne Meara, Ben Stiller's mom who passed away in 2015, and then as a beloved television actor on shows like The King Of Queens and Seinfeld.

This week, Ben Stiller sat down for a video chat with Jimmy Fallon for The Tonight Show to talk about some of his favorite memories of his famous dad, which he explained was a real pleasure since the family couldn't have a memorial service due to the COVID-19 outbreak.

The Something About Mary actor said he had received many messages from people who said his father had meant something special to them, which his father would have "loved." But more than anything, the actor said that the thing Jerry Stiller "really cared about" was his children.

"He'd be so happy watching us do our thing," he told Fallon. "Or his grandkids do their thing."

Although that didn't mean Jerry Stiller was above a little necessary critiquing now and then. Like when he went to watch his granddaughter, Ben Stiller's daughter Ella, in a fourth grade play some years ago. As the Tropic Thunder actor described it, "They were doing 'Legend Of Sleepy Hollow' I think, and he came to see it at school. And afterwards I said, 'Dad, what did you think?' And he said, 'I didn't care for it.'"

While Jerry Stiller thought his granddaughter Ella "was amazing and had the commitment and she was shining up there," his son recalled that his opinion of the other performers was not so effusive. "I didn't feel the rest of the kids were up to it."

Whether Jerry Stiller liked the play or not, it seems that he was always happy to see the people he loved perform. In a recent interview with the New Yorker, Ben Stiller talked about his dad coming to watch him in a play at summer camp one year when he was young, "I remember him watching the play. And I sang some song in it, and I remember him having this big smile. It wasn’t a laugh, but it was him just appreciating seeing his kid performing. I think he just loved seeing his kids act, and do their thing."

At the end of the day, Jerry Stiller was a family man. A family man willing to critique young kids, sure, but a man who showed up for the people he loved. Even if they were in a play he didn't care for, he sure seemed to care for them.