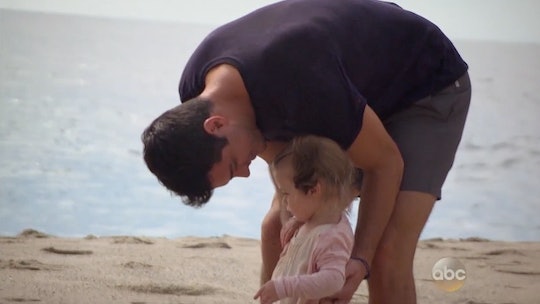 Ben's Short-Shorts On 'The Bachelor' Really Weren't That Short... Or Were They?

Ben Higgins is quite possibly one of the most normal men in America. The only odd thing about him might be the fact that he's looking for his soulmate on national television. But on Monday's episode of The Bachelor, Ben donned some short-shorts on his hometown date with Amanda Stanton and her children. But let's be real: Ben's short-shorts on The Bachelor weren't even all that short. Or were they? It depends on where you stand on Ben and men in shorts, apparently, according to Twitter.

To play around on the beach with Amanda and her two daughters, Ben wore some swim trunks that were a little shorter than some men might wear. Granted, they were above the knee and a little snug. We have to accept this. One Twitter user suspected that Ben had nabbed a pair of Amanda's daughter's shorts. Another was "super uncomfortable" with the length. But were they really that bad? Although Ben likes to travel, according to his official ABC bio, Ben is from Indiana. It's not surprising that he has the fashion sense of Brandon Walsh at the Beverley Hills Beach Club.

For the record, Ben's pair are a little updated and actually look sort of grown up, in my humble female opinion. If they were perhaps an inch or two shorter, it would have been less family friendly. And at least he wears them well, right?

Ben Higgins is just a nice guy. So why pick on him for his poor choice of drawers? If you want to really get down to it, he probably didn't have any say in the wardrobe selection. Spoiler alert: there are a lot of producers and wardrobe talent working on reality shows. So even if you hate Ben's leisure attire, it's a safe bet that someone handed them to him and told him to put them on. We will have to await an official statement from Ben's thighs to clear the air.

There is more bad news if you hate those shorts but still have a total crush on Ben. This isn't the first time he's rocked questionable swim attire. Check this out:

At least he's always been athletic, right? Overall, those shorts on the beach weren't totally unacceptable. He could have worn a Speedo, for goodness sakes. Bachelor Nation, get it together. Where are your priorities?

"Nice" guys like Ben always make me a little nervous, but you have to give credit where credit is due. Throughout this season, he has dealt with lots of drama like a champion. He has been so compassionate every single time one of the girls needed to flip their lids for a moment under pressure and you can tell that he probably, genuinely, feels bad when he sends someone like Jubilee home. He tried his best to get to know each girl. He's also so totally into this whole televised, looking-for-love process that we've even overlooked the fact that he is an awkward kisser. A bad taste in swimwear is a negotiable price of admission, as sex and dating guru Dan Savage might put it.

Ben has lots of seemingly good qualities. Let's not let hem length get in the way of true love. If anything, he might be too "normal" for his own good, in that Brandon Walsh sort of way. Who says that's such a bad thing?