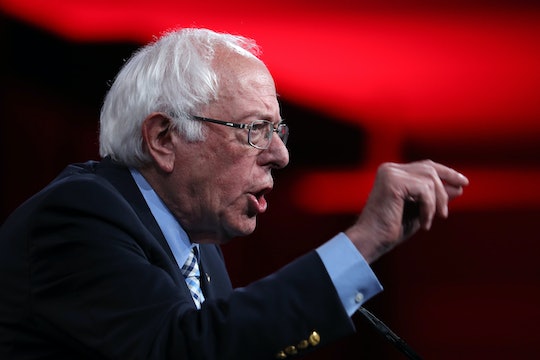 Bernie Sanders' Reaction To A Noisy Baby Was NOT Cute

Any parent can tell you that taking your baby out in public is always a crap shoot. Sometimes they're as good as gold, quiet and placid and amenable. Other times they sleep which is always sort of awesome. And then there's the rest of the time, when your kids kind of don't care about being quiet. When they make noises and live their lives like no one is watching. If I was going to hazard a guess, I would say this is basically about 80 percent of the time. Everyone gets it, kids are loud. Except Bernie Sanders, whose reaction a noisy baby was definitely not his best look. I guess he's forgotten what it's like to deal with babies who don't care who you are.

The senator from Vermont and Democratic presidential candidate was at a recent campaign event to speak to potential voters when a baby made themselves heard in the background. Now it should be noted that Sanders has a bit of a history as a curmudgeon, someone who isn't interested in being charming or being one of those baby kissing politicians because he has big issues to discuss like health care and climate change. I get that, and honestly I respect it. But when a baby cries out during your speech and you point at them and say, "Can we keep that down a bit?" No Sen. Sanders, just no thank you.

Romper has reached out to Sen. Sanders for comment and is waiting for a reply.

In a video gleefully shared by critics who referred to Sanders as a socialist as though it were a dirty word, the senator can be heard asking someone off to the side "Can we keep that down a bit?" when a baby squeals. It appears to throw him off his train of thought for a moment, which I totally understand. I haven't been able to finish a train of thought in about 20 years, I know babies are wild cards. But they're also wild cards that need a little understanding. As a father of four and grandfather of seven, Bernie Sanders should have a little more patience with babies.

After all, there are plenty other politicians out there who show a significant amount of empathy and patience when they're dealing with little ones. Democratic presidential candidate Kamala Harris welcomes children to political rallies, regardless of their unpredictability, because as she told CNN, she "sees herself" in them. Fellow Democratic presidential candidate Elizabeth Warren has a tradition of sharing a pinky promise with little girls at her campaign events, where she says to them, "I'm running for president because that's what girls do."

Bernie Sanders' reaction to a baby making noise speaks a little to me of the double standard in politics. That perhaps men can focus on the issues while women need to focus on being warm and kind and also focused on the issues.

To be honest, it wouldn't be such a terrible thing to have a woman in the White House who knows how to get s**t done, even if a baby is crying in the background. I'm just saying.