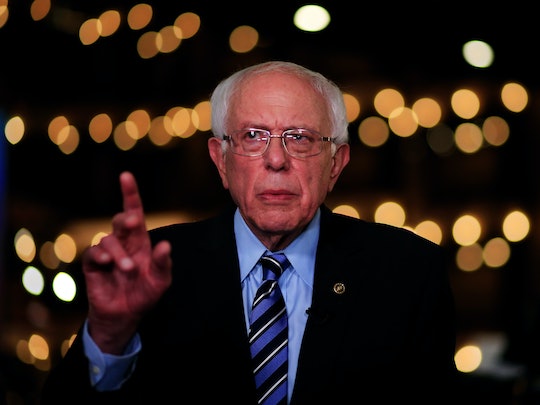 At the second round of Democratic debates on Tuesday night, a total of 10 Democratic presidential hopefuls tackled hot-button issues, including immigration and the humanitarian crisis happening at the border. And, perhaps unsurprisingly, Vermont Sen. Bernie Sanders' reminder about immigrant families attempting to seek refuge in the United States honed in on the real issue at hand.

Sanders' powerful comment about immigration occurred after CNN's Jake Tapper asked the presidential candidates whether they planned to decriminalize border crossings. Massachusetts Sen. Elizabeth Warren spoke passionately about the Trump administration's policies that "break families apart," according to Politico, and her remark received a lot of praise. But it was Sanders who might have explained the issue best.

In case you missed it, Sanders said at the debate on Tuesday night he believed that President Trump has worked to demonize immigrants. What's more? Sanders said that, in his eyes, "If a mother and a child walk thousands of miles on a dangerous path, they are not criminals. They are fleeing violence."

Sanders then proposed a different approach to border laws, stating, according to The Daily Beast: "What we will do, the first week we are in the White House, is bring the entire hemisphere together to talk about how we rebuild Honduras, Guatemala, and El Salvador so people do not have to flee their own countries."

Sanders made it clear he hopes to go further than simply protecting the American border — he aspires to get to the root of the issue, especially where it concerns the violence of three countries known as the Northern Triangle where gang violence remains rampant and where people are fleeing their home countries in droves in an effort to make their families safe, according to The Daily Beast.

And, as Sanders wisely pointed out, a mother and child walking thousands of miles to a country where they don't know anyone and might not even know the language aren't coming to cause violence — they're are coming to escape it.

It goes without saying immigration is one of the most important topics on the table for the 2020 presidential race. And, in recent months, the Trump administration has come under fire for separating families at the border and "inhumane" conditions in detention facilities, according to PBS. What's more, the president continues to promote the agenda of building a border wall, even though experts argue it won't solve the country's immigration issues.

Other people agree with these sentiments, with one person writing on Twitter, "Bernie’s the only candidate who has addressed the root causes of latin american immigration - ones that the united states played a huge part in creating."

Another person chimed in: "On immigration, Bernie and Warren take the debate once again out of the cul-de-sac of political gotcha questions, and instead call out the racism underpinning Trump's approach and explain why the criminalizing of border crossings is the linchpin of the separation policy."

It's refreshing to hear Sanders' perspective on immigrant families attempting to seek safety and refuge in the United States because he sees them as people in need rather than dangerous criminals, a view that's extremely important during this divisive time in America.