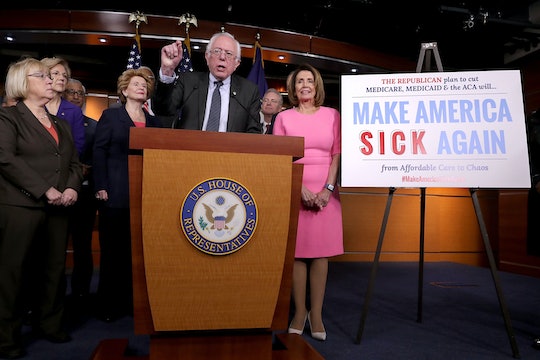 Just in case you were thinking that there was no way for 2017 to be any weirder than 2016, allow me to draw your attention to the fact that Vermont Sen. Bernie Sanders brought a giant board with one of President-elect Donald Trump's tweets on it to a Republican debate on how to repeal the Affordable Care Act this Wednesday. Yes, you read that right. Already, social media is rife with amazing jokes about Bernie Sanders Trump tweet board that only further serve to remind us all that we have entered prime Twilight Zone-era when it comes to American politics.

Sanders took the floor in the House to beg Republicans to not cut Medicaid and Medicare funding, and brought with him a giant, blown up print out of the president-elect's very own tweet to back up his argument. We all knew that Bernie was good at appealing to Millennials during his own campaign — the fact that he thought to use Trump's own social media posts against him speaks to the senator's passion when it comes to fighting the good fight for his supporters.

It was, in the lingo of the internet age, the very essence of "showing the receipts" when it comes to Trump's varying stances on the issue. Sanders obviously thought that it wasn't enough to remind Republicans that their newly elected president had said 10,000 different things about healthcare policy over the years. He wanted them in straight up poster board on an easel.

Soon, Sanders stunning visual aid became an internet meme, as all things must eventually become in this New World Order:

Seriously, what other evidence does one need to prove that things are entirely out control in the legislature than Sanders feeling it necessary to print Trump tweets to make a point to the GOP?

Although his original board has been Photoshopped a million times on Twitter to make a joke, the one Sanders brought to back him up was from Trump's official account in 2015, which read, "I was the first & only potential GOP candidate to state there will be no cuts to Social Security, Medicare & Medicaid. Huckabee copied me." Yes, Trump said that.

Yet, less than a month before entering office, the president-elect and his surrogates are assuring Americans that repealing Obamacare will be one of the first things they set about doing. That means cuts to Medicare and Medicaid. That contradiction is what Sanders apparently wanted to drive home with his tweet board.

Wait, let's check out these tweet boards once more time because really, what else do we have to do?

"Right now, before Congress wastes an enormous amount of time, Donald Trump has got to come forward — maybe through a tweet, one of his tweets ― and say clearly that Donald Trump will veto any legislation that cuts Medicare, that cuts Medicaid or that cuts Social Security," Sanders said on the floor this week. He added, "And if he makes that clear to his Republican colleagues, we can save us all a whole lot of time and start getting to work doing what this country desperately needs to have done." (Sort of like a disgruntled uncle who doesn't understand why anyone would need the internet in the first place.)

Aside: "Print it out!" is what everyone should say, all the time, from now on, every time Trump tweets something that contradicts himself, in their best Sanders impression.

Come on — Sanders standing up next to a tweet print out is quite possibly the most adorable/horrifying thing that will ever happen in Congress. Given that our president-elect has chosen Twitter over press conferences as his preferred form of communication, though, there might be some method to Sanders' apparent madness.