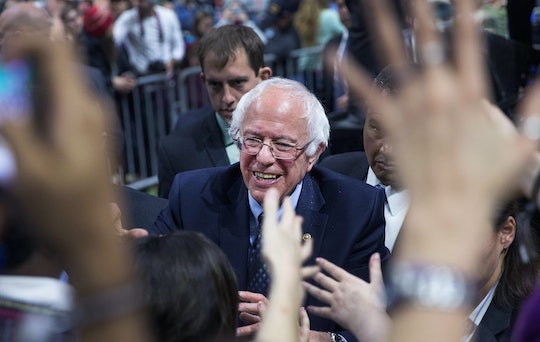 As a woman and a mother, I'm going to say it: Paid leave is important to me. It is something I didn't have accessible to me the "first time around," and while I am not sure if I want a second child, the financial implications surrounding a second — especially the loss of pay during labor, delivery, and maternity leave — are certainly one of the things holding me back. So, as this election season heats up, and each candidates platform is bisected and dissected, their paid leave policies are definitely of interest to me. But what is former Vermont Sen. Bernie Sanders voting record on paid leave? What does Sanders think about maternity leave?

The good news is Sanders' family record is solid. Sanders was — and still is — a supporter of the Healthy Families Act, a bill aimed to give every worker seven days of paid sick leave per year. And in June 2015, Sanders cosponsored the FAMILY Act, a vital piece of legislation that would not only allow workers to take paid time off after the birth of a child, it would give them the ability to take time off to care for a sick loved one or even themselves, according to FeelTheBern.com. (If passed, the FAMILY Act will guarantee families at least 12 weeks of paid family and medical leave.) And, according to Sanders, it is a travesty that America is the only major country not offering paid maternity leave, according to On The Issues:

Here's the point: Every other major country on Earth, every one, including some small countries, say that when a mother has a baby, she should stay home with that baby. We are the only major country. Social Security, Medicare, and Medicaid. [It's not right.] That's not what the American people want.

And he's right: The U.S. is the only major country that doesn't guarantee paid leave. (Just check out the terribly depressing graphic below.)

But Sanders isn't just spearheading various proposals and bills. In June 2015 Sanders took to his official campaign site/blog, BernieSanders.com, to speak out about just how important the first weeks and months of a child's life are, to their personality and their development:

Virtually every psychologist who has studied this issue agrees that the first weeks and months of life are enormously important to a newborn’s emotional and intellectual development. It’s understood that [mothers] and fathers should spend this time bonding with the new person they have brought into the world....[However,] the Family and Medical Leave Act we signed into law in 1993 is inadequate for the task...nearly eight out of ten workers who are eligible to take time off under this law cannot do so because they can’t afford it. Even worse, 40 percent of American workers aren’t even eligible for this unpaid leave.

Opponents have, of course, questioned the logistics behind such the FAMILY Act (mainly questioning how our already indebted government could afford to fund such a program). But, when Sanders was asked how he would pay for said leave, his response was simple: it would just take a small increase to the payroll tax, according to On The Issues.

And, while Sanders rival, former Secretary of State Hillary Clinton also supports paid leave, her policies lack clarity. So, in the case of paid leave, I have to say: Sanders wins (at least according to this mama).