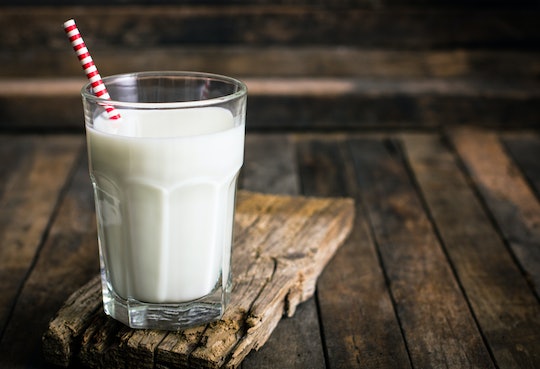 Turns Out, Your Favorite Childhood Drink Can Be Really Helpful When You're TTC

When I was trying to conceive (TTC), I tried every old wives' tale and “tip and trick” in the book, no matter how weird they seemed. Since it took a while to happen, I figured it wouldn’t hurt. When I finally got pregnant, I was taking Mucinex and a prenatal vitamin, and my husband was taking a vitamin specifically “for healthy sperm.” I even monitored my diet down to what I drank. I'm not alone — a question that commonly popped up in my TTC groups wondered if there is a best milk to drink when trying to get pregnant. May sound odd, but not as odd as taking Mucinex to thin cervical mucus, am I right?

Turns out, there is a preferred milk. “About 40 percent of infertility in females results from either anovulation (i.e., not ovulating at all) or from not ovulating frequently enough. So, in the 40 percent of infertile woman who suffer from infertility due to anovulation, drinking whole milk can make them more fertile,” Dr. Jamil Abdur-Rahman, who is an OB-GYN and medical travel blogger, along with his twin brother Idries for TwinDoctorsTV, tells Romper.

According to the American Pregnancy Association (APA), women who drank three or more glasses of whole milk per day were 70 percent less likely to be infertile due to “failed ovulation." But how does that work and what does “failed ovulation” mean exactly?

First of all, Abdur-Rahman says there isn’t “technically” an entity known as “failed ovulation,” but what is being referred to in the study the APA noted is called “anovulatory cycles.” That means you don’t release an egg when it’s time to ovulate. Women who deal with anovulatory cycles “also don't produce the progesterone hormone that helps to facilitate pregnancy. If the hormone that helps to facilitate pregnancy hasn't been created, and if no egg has been released from the ovarian follicle to then be fertilized, achieving pregnancy becomes next to impossible,” Abdur-Rahman explains.

So how does whole milk come into play with all of this? Because of the fat content of whole milk, it’s supposed to “stimulate” ovulation, Abdur-Rahman says. He adds that foods containing high levels of animal fat also contain high levels of estrogen — another major female hormone. “For example, one 8-ounce glass of whole milk contains 2.2 nanograms of estrogen, while one 8-ounce glass of skim milk contains only 0.8 nanograms of estrogen,” Abdur-Rahman explains. “The elevated estrogen levels caused by drinking whole milk then decrease the levels of hormone in the body called Insulin-Like Growth Factor 1 (i.e., IGF-1). Decreasing IGF-1 levels helps to promote ovulation.”

Other things you can ingest to help with fertility without the use of medications include whole grains, leafy green vegetables, and yams. “These three foods address infertility in about 40 percent of women who suffer infertility due to anovulation,” Abdur-Rahman says. Whole grains are digested more slowly, which means your insulin levels don’t spike after eating them, and “just like lower IGF-1 levels promote ovulation [as explained above], so too does lower insulin levels,” he notes. “Both yams and green leafy vegetables have been found, much like whole grains, to promote ovulation.”

So drink that whole milk, ladies. And if you’re eating yams, leafy greens and whole grains, that should help a lot, too — and odds are pretty good at it helping 40 percent of women. If these remedies still aren’t working after more than six months, it may be time to talk to your healthcare provider to see what they suggest for the next steps in your TTC journey. Good luck and happy drinking.

More Like This
31 Sweet & Savory Apple Recipes To Make This Fall
These Oktoberfest Instagram Captions Will Get Likes & Prosts
Endometriosis & Your Sex Life
What Is RSV?