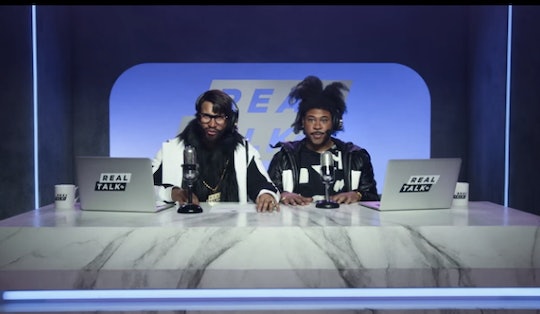 If there is anything better than nachos and Sunday night beers for the Super Bowl, it's these quotes from Key and Peele's Real Talk livestream during the big game that are guaranteed to keep even the most laid back of football fans entertained. The comedy duo is doing live running commentary as their characters Lee and Morris on Sunday night — but here's the catch: they can't say Super Bowl, or the names of the players, or the teams. It's going to be as perfect as Beyoncé's halftime show, for sure.

If you've never seen Key and Peele's hysterical "East-West Bowl," you need to get on that before Real Talk starts at kickoff. You won't need any other reason to distract yourself from the game and watch them all night. (Key and Peele are livestreaming their improved commentary on Squarespace starting at 6 p.m.) Anthony Casalena, the CEO of Squarespace, has said that it's just going to be Lee and Morris, hanging out and "making stuff up." I mean, what else could you possibly want?

On Twitter, sports and comedy fans were ready for them. One user tweeted that she was watching the game on mute and just listening to Lee and Morris riff on her speakers. That's the way to do it. The two, along with Squarespace, were also using the social network to field questions from viewers, as long as they were "legalistic."

Here are some highlights from the livestream:

Key and Peele's commentary throughout the game was not to be missed. Can this be a new Super Bowl tradition, Puppy Bowl style?