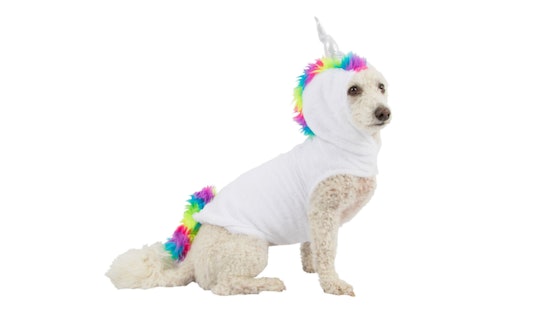 The Best Unicorn Halloween Costumes For The Whole Family, Including The Dog

If you've ever popped your head inside a Justice or Claire's store, or pretty much any store, for that matter, you know what's hot in girl fashion these days: hashtag slogans, reversible sequins, and unicorns, unicorns, unicorns. White, pink, purple, with or without rainbows, the mythical creatures are everywhere. So with Halloween approaching, you might even be considering picking a unicorn costume for your child, or maybe even another member of the family.

It probably isn't surprising that unicorns are back on our radar. As The Guardian pointed out, unicorns are nothing new; they've been a part of human mythology for 3,000 years. Their rep for healing powers and their fascinating mysterious nature are part of their charm, explained the website Unicorns Rule. The site also suggested that the revival of the My Little Pony series in 2000 may have helped bring unicorns back into vogue, and may even have sparked the association with rainbows because of the designs on the show's unicorn characters. Some adults may have developed a fondness for the one-horned beasts because of memes connecting them to the gay rights movement and to general activism, said the site.

Since unicorns are so trendy now, it's easy to find costumes and accessories for kids who want to experience some of that magic at Halloween. Better yet, why not get the whole family into the act by going en masse as a unicorn clan? You'll wow the neighborhood and make memories at the same time. Plus, there are plenty of options for everyone, from full-scale unicorn outfits to simpler accessories and hoodies for family members who want to keep it simple. Take a look at some of the possibilities for a family unicorn Halloween.

More Like This
From Captions To Gifts, These Are All The Kindergarten Graduation Ideas You Need
34 Instagram Captions Perfect For Preschool Graduation Photos
21 Magical Shows & Movies About Unicorns
19 Gifts College Grads Will Love & Actually Use