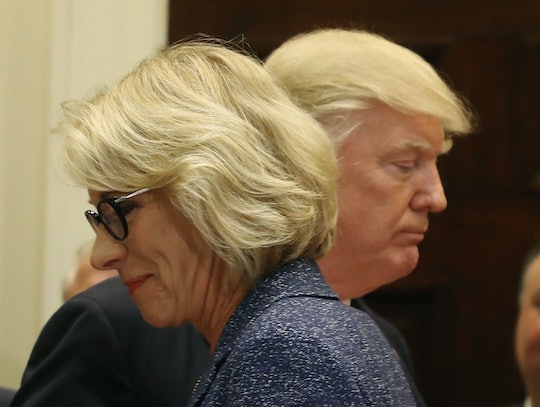 Ahead of testifying before Congress about the Trump administration's education budget later this week, the secretary of the Department of Education spoke at a "pro-school choice" conference in Indianapolis. Needless to say, it did not go well. While delivering an address at the conference, Secretary Betsy DeVos called school choice opponents "flat-earthers" and claimed that anyone who doesn't believe in school vouchers is making a huge mistake.

Just in case you missed the reference, "flat-earthers" refers to clergy and statesmen in the Middle Ages who punished scientists for claiming that Earth is actually round and not flat, in flagrant opposition to church and political doctrine at the time. Most everyone knows that those "flat-earthers" were wrong now (though there are still some flat-earth activists around today).

But DeVos doesn't seem to understand the hypocrisy in her comments. Because, according to some public statements she's made about "school choice," the new head of the Department of Education doesn't oppose private or public schools teaching Creationism, which relies on some very medieval ideas about science, including the idea that Earth might have been, at one time, flat. She's all about giving a platform to "flat-earthers" as long as they don't get in the way of her school voucher program.

Aside from this glitch in rhetorical logic, there's another huge point that DeVos misses when criticizing opponents of her "school choice" ideas. (Let's call them ideas because, as of Tuesday, there has been no detailed plan for reforming the Department of Education aside from promises that there is a plan.) DeVos misses the point that "school choice" endangers the public education system.

DeVos said on Monday that opponents of a school voucher system would be making a "terrible mistake" if they shot down her reforms, despite there being no solid action plan. She added that those states "will be hurting the children and families who can least afford it." DeVos said, "If politicians in a state block education choice, it means those politicians do not support equal opportunity for all kids."

Since the administration has offered no details yet about its plans for public education, people can only trust DeVos' record and statements in hearings about pulling federal funding from public schools and implementing a voucher program. By definition, voucher programs take funding from public schools and give families tax credits to send their children to other schools (private or home-schooled).

But in states where voucher programs have been implemented already, students reportedly don't perform any better. And public schools are left in the lurch trying to help students perform with limited funding because a large portion of the state's education dollars go to students who use vouchers. Although advocates for voucher programs claim that it helps lower income students or students with disabilities, studies show that they are left behind. "School choice" ends up costing taxpayers more in the long term.

DeVos saying that opponents of her supposed "school choice" program are "making a big mistake" sounds more like a threat from the administration more than a promise to help public schools perform better. If anything, the only "flat-earthers" in Congress are the ones who are convinced that the public school system can't be improved even if it had some decent federal funding to add to their budgets. If you build it, right?