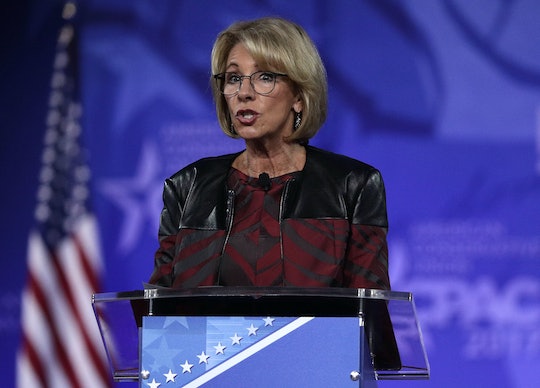 There may not be anyone more out-of-touch with the nation's education system than the very person in charge of it, education secretary Betsy DeVos. During a speech at Brookings Institute, DeVos suggested that the controversial issue of expanding school choice is similar to the ever-growing choices of ride-sharing apps. Betsy DeVos compares education to taking an Uber, and people are not having it.

Just as the traditional taxi systems revolted against ridesharing, so too does the education establishment feel threatened by the rise of school choice. In both cases, the entrenched status quo has resisted models that empower individuals.

There are many, many problems with this analogy. The most blatant one is that there are people who can't afford to take a taxi, Uber or Lyft everywhere and must rely on public transportation. Much like 90 percent of kids rely on public schools.

Ridesharing apps are, for the most part, largely available only in cities, and of course are really only an option for those willing to spend $13 on a trip and a smartphone with constant Internet. But every kid needs an education, no matter what income level or part of the country they live in.

Russ Whitehurst, a senior fellow at the Brookings Institution and moderator of the event, told Business Insider that DeVos paints "education as something like a business" by comparing school choice to the consumer decision of picking a ridesharing app.

Whitehurst also makes a great point that if a consumer picks Uber and has a bad experience with them, they can decide pretty quickly whether or not to use them again. But parents won't be able to tell that their choice of school isn't working out until it's too late. If you wish you had chosen Lyft instead of Uber, it's probably because they took too long to come or drove too slowly. But if your child doesn't have a good experience at his or her school, it's their education that's at stake.

"If you pick a bad school, you're probably not in a position to know that until your child is failing at the next step," Whitehurst said.

Alongside her ridiculously tone-deaf analogy, DeVos also tried to make it seem as though the 13.5 percent cut to the Education Department’s budget is No Big Deal.

DeVos referred to a report released in January that found grants for the country's worst-performing schools had “no significant impacts” on “math or reading test scores, high school graduation or college enrollment of students.”

“At what point do we accept the fact that throwing money at the problem isn’t the solution?” DeVos asked during her speech. But we need to focus on how money plays a part in a movement that will affect kids' education: especially since charters — whether they're run by for-profit education organizations or are non-profit — do big business. And siphoning money from public schools in low-income neighborhoods to fund vouchers for charters only hurts the most vulnerable kids. Uber and Lyft can't replace public transportation systems, try as they might. And charters simply can't be the option for everyone.