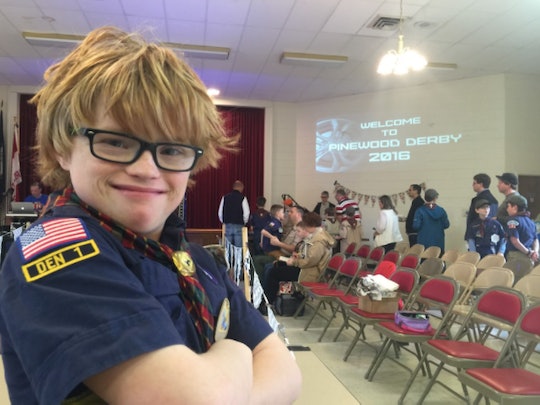 From the front row of Campbell Elementary School’s multi-purpose room back in May, surrounded by his classmates, my son Anton scanned the audience, found me, and then stuck his tongue out, pointing, miming laughter. Despite pre-adolescent stabs at being cool, his insistent eagerness may be the most striking feature of his congenital “disability,” mosaic Down syndrome, wherein some of his cells are typical, others have Trisome 21. In fact, it's this feature that threatens my son's ability to succeed if Betsy DeVos' nomination is confirmed for Secretary of Education. I waved back (congenitally geeky), a silly, happy wave, as our principal stepped up to the lectern, patting the air to hush us buzzing parents, and announced it time for each rising sixth grader to stand, in turn, to deliver a five-minute speech at their "moving up" ceremony. Taking a deep breath, I inhaled — Axe deodorant, Pink perfume; scents I recognized as harbingers of middle school, the ending of an era.

How vivid this all is now. Eight months ago, I was a parent just like any other, excited, thrilled, and nervous as my son embarked on a new phase in his academic life. Eight months later, and I'm sitting on what could be the end of another era. Those nerves from that May night have now been replaced with fear, terror, and a never-ending list of scary what ifs. President Trump’s education secretary pick Betsy DeVos is up for a final confirmation vote, most likely on Monday, Feb. 6. Video from DeVos’ confirmation hearing shows her dimpled confusion about (and overall disbelief in) the Individuals With Disabilities Education Act (IDEA), which provides free, appropriate education to students with disabilities across the nation. Her nomination jeopardizes everything Anton and his supports have worked tirelessly for.

Without the IDEA, would my son have been included, expected to perform, the night of his fifth grade promotion? Would he be included in anything at all?

The IDEA gives parents a say in their child’s education every step of the way. It ensures that our children learn in the least-restrictive environment — the general education classroom — wherever possible. DeVos’ suggestion that the IDEA is “negotiable,” and “up to the states to enforce or not” is my parental nightmare. On the simplest level, it threatens Anton’s ability to do his best in school with support and accommodations. Without the IDEA, would my son have been included, expected to perform, the night of his fifth grade promotion? Would he be included in anything at all?

Eight months ago, as audience settled and the speeches began, I exchanged smiles with other parents, some I’d known for the past five years and several from the disability community. Among the first of the students to speak was our neighbor, Brady, all side-swept bangs and solemn eyes. He recalled his terror on the first day of Kindergarten:

I got to the classroom, saw all the kids I didn’t know, saw the strange teacher, and I asked my mom to homeschool me.

Then he shrugged, settling into his suit jacket. He concluded with a cocky grin: “Who would have thought in Kindergarten, I would be here, like this, today?”

Chuckling along with everyone else, I felt warmed to be part of the group. You’ve also come a long way, Mama, I secretly congratulated myself, remembering how I’d sobbed through Anton’s graduation from cooperative preschool. My funny, sensitive boy has always been bright, but young for his age, and behind, in some ways, academically. (In third grade, when classmates were reading Harry Potter, his favorite book was Caps for Sale.) How I worried “back in the day” that he’d get crushed in what I imagined to be the cut-throat arena of Kindergarten. Visions of homeschooling danced through my head at pickup time that first day when his general education teacher pulled me aside to whisper, “Ixnay on the pullups.” My sweet boy. My baby. Oh my God!

We've compromised more than once, but our goal has always been the same: keep Anton with grade-level curriculum as much as possible. There's never been a question or even a suggestion from anyone in our schools that Anton shouldn’t be given the intellectual and social challenges of every other kid. DeVos' confirmation could drastically and dangerously change all of that.

But by the second week of elementary school, teachers had “more or less” potty trained Anton (and had their good-natured ways of dealing with the “less”). Some private nursery schools will expel a student for a single accident, but public schools — so Anton’s teachers reminded me — are federally mandated to offer free, accommodated education to all — and all means all. If someone, Anton’s teachers or me, underestimates him, wants to keep him separated or babied, even for the best of reasons, someone else will check the impulse: Is this the least-restrictive environment? Is he accessing grade-level curriculum? Does he have the accommodations and supports he needs to succeed?

Per the IDEA, we have yearly individualized education plan (IEP) meetings with Anton’s teachers, his principal, and his occupational and speech therapists to determine what success means for Anton and how he can succeed. At Campbell Elementary, these meetings were often informative and lively as we pooled understandings to come up with reasonable, measurable goals for my “unconventional learner” in light of his current progress and needs. Despite passing disagreements among team members, we all saw the same kid, an open, empathetic boy who shared jokes with friends and teachers (“You’re amazing,” he’d reportedly sing in greeting his teacher every morning, waiting for her to finish the line: “Just the way you are”), but who withdrew when tired or frustrated, removing his glasses and rubbing his eyes. At times, my husband and I pushed for his full inclusion in every general education class, wanting to respect and foster our son’s social skills. We've compromised more than once, but our goal has always been the same: keep Anton with grade-level curriculum as much as possible. There's never been a question or even a suggestion from anyone in our schools that Anton shouldn’t be given the intellectual and social challenges of every other kid. DeVos' confirmation could drastically and dangerously change all of that.

And so, after five years and a dozen IEP meetings, Anton was ready to move on from elementary school. Here he is now, I thought, as the promotion speeches continued, happy to see him in his place surrounded by his peers — he wasn't a math dice winner like some of the other kids, but he was a school patroller, Boy Scout, baseball player, reader, thinker, joker. A rising middle-schooler with a small pack of buddies if I ever saw one.

I saw myself running up to rescue Anton. But then I saw him. If his lip trembled, it meant he wasn’t crying. He wasn’t speaking, but he also wasn't sitting down. Increased independence had been a running theme in the goals of all his IEP drafts, his number-one need as he approached sixth grade. So with the others in the audience, I stayed in my seat. From a horrible distance, I just watched my son’s distress.

As the speeches kept coming, each time one of his friends stood up, my son would point with two v-shaped fingers to his own eyes, then to mine, and then to the speech-giver. Pay attention, mom. My confidence in Anton’s happiness that night felt solid even though it had been a rough week. Two days prior, I’d learned that my presumed “neurotypical” daughter had failed eighth-grade algebra. More upsetting, after a swift decline, my larger-than-life father-in-law’s death (Anton's "Baba") seemed imminent and my husband had to skip Anton's promotion ceremony to say his last goodbye. So when it was Anton’s turn to speak, I didn’t tear up or feel my heart pound. He looks nice, I thought, glad his dress pants still fit. I readied to videotape him, typically my husband’s job.

But minutes passed, and there was nothing to record. Anton stood stock still, eyes cast down behind his thick-framed glasses — “geeky chics” that matched his dad’s — his lips moving soundlessly. The audience, too, went silent.

Later he would tell me how his body started shaking. I saw several kids cast him sympathetic looks, while others squirmed impatiently as his teacher whispered in his ear. Eventually, she put her hands on Anton’s shoulders, urging him to sit. I was beside myself. My son had Down syndrome and this was a challenging event for any kid. Why hadn’t I insisted he practice? Or written him notecards in all-caps? I knew he had tracking and concentration problems. I should have written/read the stupid speech.

I suspect most parents of a “different” kid have wobbled on the brink of this abyss. (But I also suspect most parents have kids who at some point seem “different,” so who doesn’t wobble?) Trump’s attorney general pick, Jeff Sessions, has argued before the Senate that accommodations for students with disabilities contribute to the declining “civility” and “discipline” in American classrooms. When we internalize these stigmatizing attitudes, we forget that the needs for humor, breaks, movement, patience, empathy, even disorder are those all kids sometimes share. That night, I saw myself running up to rescue Anton. But then I saw him. If his lip trembled, it meant he wasn’t crying. He wasn’t speaking, but he also wasn't sitting down. Increased independence had been a running theme in the goals of all his IEP drafts, his number-one need as he approached sixth grade. So with the others in the audience, I stayed in my seat. From a horrible distance, I just watched my son’s distress.

With the appropriate support, none of us need be defined by our (special or not) needs or the needs of our family members.

I was lucky. The abyss closed up without my falling in: “You rock, Anton!” one shaky voice called out, instantly joined by five voices, then 10. Soon the entire audience chanted, “An-ton! An-ton! An-ton!” I cried, overwhelmed by what seemed like a miracle. When the crowd finally quieted, Anton read a speech no better or worse than the other kids’. He thanked a million teachers and said his favorite subject was recess. When he finished, the undisciplined crowd stood — roaring, clapping, crying — with a standing ovation. My own standing ovation was as much for the community around us as it was for my son.

Anton, now a mid-year sixth grader with two “OK” oral book talks under his belt, talks about elementary school less and less. Even in the weeks when the memory of promotion night was fresh, he didn’t mention the speech. Instead, he told everyone and his mother how he’d bravely asked his crush to take a selfie with him; he sometimes referenced our “late, late” dinner at Red Robin with his friends. He talked often about how that night — right after he was promoted — his Baba became an “angel” in heaven. Occasionally, he still sleeps with a photo of Baba next to his bed. But the drama of his stage fright, then his speaking? — it just passed. With the appropriate support, none of us need be defined by our (special or not) needs or the needs of our family members.

Anton took his standing ovation, his promotion, even his free, public education for granted. When Anton was drowning, his community’s love carried him to shore. Those supports are in place for a reason. They ensure no child fails or is left behind. Once on solid ground, he never looked back. Entitled? Absolutely. But doesn’t every kid have the right to be?