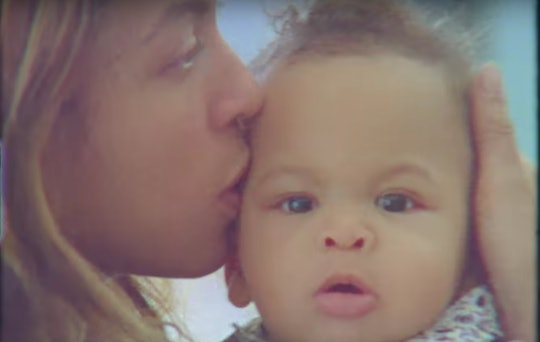 Beyoncé never does anything in half measures. As an artist she has managed to stand out so far ahead of the pack, the pack can't even really see her anymore. She is a person who takes the message behind her performance just as seriously as she takes her performance, because her vision means something to her. This is something fans get to see in her new Netflix documentary Homecoming, which she just dropped (along with a new album) on Wednesday. But here's the thing; all of that perfection is taxing. In fact, Beyoncé admitted that balancing motherhood and career is "a lot" in Homecoming, proving she is indeed human with vulnerabilities and trials like us. I was beginning to wonder.

As everyone in the Beyhive is well aware, Beyoncé and her husband JAY-Z are parents to three children: 7-year-old daughter Blue Ivy and 1-year-old twins, daughter Rumi and son Sir. While the Lemonade singer has a history of keeping her private life very much private, in her new Homecoming documentary she does open up about how difficult she sometimes finds trying to balance her career with being present for her family. An issue that most parents presumably struggle with on a regular basis without the added pressure of being Beyoncé.

As Queen Bey explained in Homecoming, which was filmed as she performed as the first black female headliner at Coachella in 2018: "Just trying to figure out how to balance being a mother of a 6-year-old and of twins that need me and giving myself creatively and physically it is a lot to juggle."

She added, "It's not like before when I could rehearse 15 hours straight — I have children, I have a husband. I have to take care of my body."

Trying to be mindful of needing a break from work probably doesn't come all that naturally to Beyoncé. She has been singing since she was a little girl and initially catapulted to fame in 1997 as the lead singer for Destiny's Child when she was just 26 years old. Since then, she has gone on to enjoy a massively successful solo career as a performer.

But she is also a mom. And sometimes motherhood shakes up your plans in ways you don't expect. Like when she found out she was pregnant with twins and had to cancel her Coachella performance in 2017, according to People. And her pregnancy was more difficult than she anticipated, as ELLE recounted from Homecoming:

I was supposed to do Coachella the year prior but I got pregnant unexpectedly. And it ended up being twins, which was even more of a surprise. My body went through more than I knew it could. I was 218 pounds the day I gave birth. I had an extremely difficult pregnancy. I had high blood pressure. I developed toxemia, preeclampsia.

Her own physical struggles notwithstanding, there was an issue with one of the twins. "In the womb, one of my babies' hearts paused a few times so I had to get an emergency C-section," she shared in Homecoming.

Even after the twins were safely delivered and she was rehearsing for Coachella in 2018, she admitted in Homecoming that she found she had a difficult time staying present because of her children:

My mind was not there. My mind wanted to be with my children. What people don't see is the sacrifice. I would dance and go off to the trailer and breastfeed the babies, the days I could I would bring the children.

I think it's seductively simple to look at celebrities and assume they have it much easier than the rest of us as parents, but the truth is someone like Beyoncé has a lot of pressure on her. To perform, to excel, to stay in the public eye.

It's a lot to ask of any mom... even one as fully together as Beyoncé.

More Like This
'Workin’ Moms' Season 7 Is Reportedly In The Works! Here’s Everything We Know
Exclusive: Watch Hayden Panettiere Talk About Addiction Treatment 4 Months Postpartum
Gabrielle Union Admits She May Be Becoming A Bit Of A Dance Mom With 3-Year-Old Kaavia
10 Parenting Lessons From Abbott Elementary That You'll Want To Write Down