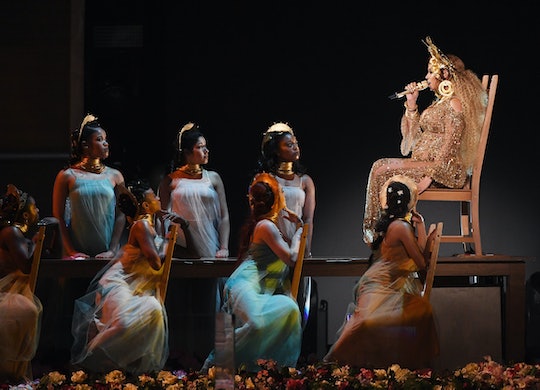 In case you're somehow still unaware of this fact, Beyoncé is The Queen of all things, which was further proven during her 2017 Grammys performance. Sure the anticipation of the performance may have been pretty high to begin with, but that's nothing compared to what it was like when it actually happened. It contained everything you'd ever hope to want in a performance, including an interesting part involving a chair. So naturally, the internet took ran with it. Once it occurred, Beyoncé chair memes at the 2017 Grammys could be seen all over Twitter, and just like Bey herself, it was pretty amazing.

This is, of course, not to undermine all of the other incredible things Beyoncé did throughout her truly epic performance. However, watching her lean back in that chair until she was pretty much vertical sent social media into complete overdrive, with many either scared that she was going to fall over (but of course she didn't) or wishing that they could ever trust something/someone as much as Queen Bey trusted that chair. And I mean, same. As someone who has tried and failed at trust falls before, I can say with absolute certainty that this is much harder to do that the legendary singer made it look. Here are some of the best memes that came from this amazing moment...

But really, I think we can all agree that is one very #blessed chair now, right? That chair is living its best life right during music's biggest. As hard as we try, our lives will probably never be as great as the one that chair is enjoying. Just saying!

Honestly, a chair hasn't gotten this much attention since Clint Eastwood decided to start talking to one all those years ago at the Republican National Convention back in 2012. And even that feels like nothing compared to how much this Grammys moment is being praised.

Suffice to say, we can mark this as yet another iconic moment in Beyoncé's already impressive music career. Just when you think she can't possibly surprise us with her talents any more, she goes and does something like this. As one tweet mentioned, it is very reminiscent of the gravity lean Michael Jackson was known for doing, particularly during his hit song "Smooth Criminal." Only this was kind of the reverse of that and with a chair.

Either way, it was an unforgettable moment and something I will be re-playing for weeks (OK fine, years) to come. You can always count on Bey to make anything interesting (even a chair, you guys).