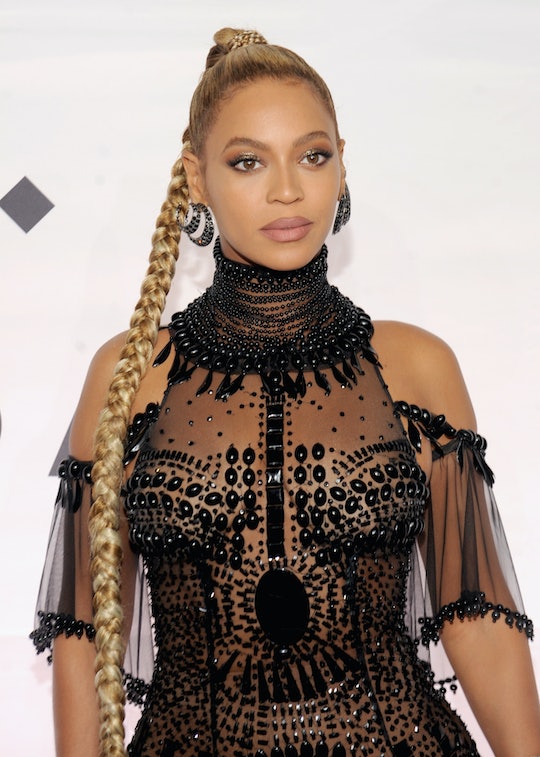 Who better to cover Vogue's September issue, aka its most important issue of the year, than Queen Beyoncé? Instead of sitting down for a typical Q&A for her cover story, Beyoncé shared personal first-person stories about a variety of topics, ranging from parenting to her music career to giving birth to the twins to postpartum body positivity. Specifically, Beyoncé opened up about her "mommy pouch" — and the comment is already resonating with fans.

In the Vogue piece, which was published Monday morning, Beyoncé explained how she feels about her body today, a little more than a year after giving birth to twins Rumi and Sir. "To this day my arms, shoulders, breasts, and thighs are fuller. I have a little mommy pouch, and I’m in no rush to get rid of it. I think it’s real," Beyoncé wrote. "Whenever I’m ready to get a six-pack, I will go into beast zone and work my ass off until I have it. But right now, my little FUPA and I feel like we are meant to be."

A FUPA is a "fatty upper pelvic area," Tiger Fitness explained. And mommy pouch, also known as mommy pooch, mommy tummy, postpartum abdominal separation, and diastasis recti abdominis, is when the tissue connecting the two sides of the abdominal muscle stretches, causing the muscle to separate, according to the American Physical Therapy Association. It results in a visible separation of the "six-pack muscles."

When I googled mommy pouch, Google bombarded me with articles filled with tips for getting rid of a mommy pouch. Ugh. Articles like those contribute to women feeling insecure about their bodies, and it puts pressure on postpartum mothers to hit the gym. In contrast, Beyoncé's unabashed, proud acceptance of her mommy pouch sends a much stronger message — that every body is beautiful, and that it's powerful to embrace the features society wants you to think are flaws.

After the interview dropped, many fans (including actress Laverne Cox) took to social media to praise Beyoncé's attitude about her mommy pouch:

Bey also opened up about the process of delivering the twins in her Vogue piece. For the month leading up to their birth, Beyoncé was on bed rest. She ultimately had to have an emergency C-section because her and the twins' health were at risk. Afterwards, she, Rumi, and Sir had to spend several weeks in the NICU — and that postpartum recovery period really shook her up, leading her to a journey of self-love and self-care. Beyoncé explained:

After the C-section, my core felt different. It had been major surgery. Some of your organs are shifted temporarily, and in rare cases, removed temporarily during delivery. I am not sure everyone understands that. I needed time to heal, to recover. During my recovery, I gave myself self-love and self-care, and I embraced being curvier. I accepted what my body wanted to be. After six months, I started preparing for Coachella. I became vegan temporarily, gave up coffee, alcohol, and all fruit drinks. But I was patient with myself and enjoyed my fuller curves. My kids and husband did, too... I think it’s important for women and men to see and appreciate the beauty in their natural bodies.

It makes that Beyoncé is so tuned into body acceptance, considering she sings about embracing her body and flaws in her music. For example, in "Pretty Hurts," she sings, according to Genius:

Pretty hurts / We shine the light on whatever's worst / Tryna fix something / But you can't fix what you can't see / It's the soul that needs a surgery.

Beyoncé, thank you for being an absolute icon in everything you do.