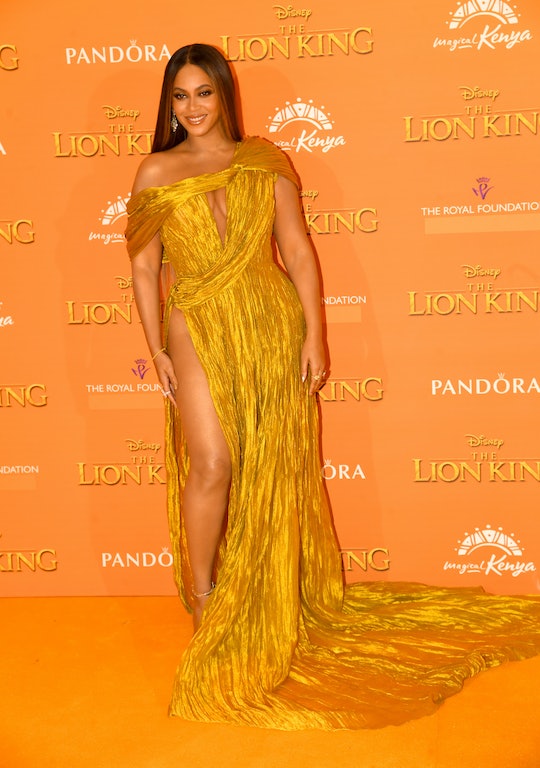 Beyoncé Has Been Spotted At The Golden Globes, & The Whole Show Just Got Better

She wasn't an interview on the red carpet, and she wasn't asked "who are you wearing" by Ryan Seacrest, but you guys: Beyonce is at the 2020 Golden Globes, and now it's an actual party. I mean, Ricky Gervais is hilarious and anytime Tom Hanks and Carol Burnett are in the same room, I'm bound to fall in love. But Bey is also there, discreetly tucked into the crowd of people, and now all is right with the world.

It's not a total surprise Beyoncé is there. She was nominated for a Golden Globe for Best Original Song for "Spirit" from The Lion King (that award went to "I'm (Gonna) Love Me Again" by Elton John and Bernie Tauplin from Rocketman), but because nobody saw her on the red carpet or in interviews beforehand, it was a bit of a surprise to spot her in the crowd. Twitter fans have been on it though — of course — and managed to capture a few images of her in the crowd, smiling and looking engaged with the awards show happening in front of her. My absolute favorite though is the way she looked during Phoebe Waller-Bridge's Obama and Fleabag joke (Responding to Barack Obama putting Fleabag on his top shows of 2019 list: "He's always been on mine"). It looks like she was laughing out loud, and this obviously means Bey and I were destined to be BFFs.

Beyoncé also looks gorgeous when she's not laughing in a black gown with gold, puffy sleeves. It's just glam enough for the Golden Globes, but looks like she can still move around and enjoy the show.

But fans were also quick to note on Twitter that Beyoncé lost the award to Elton John, who was the original songwriter for the original The Lion King film. It feels a little like... the circle of life? Guys, I don't know, I just want to crawl into Beyoncé's sleeves and live there forever. Her dress literally looks like angel wings from behind.

But even if Bey didn't win the award (Twitter is quite upset about this), I'm so happy to see her there at the Golden Globes. Everyone knows Beyoncé is pure royalty, and having her there just feels right. Now let me borrow that gown, B.