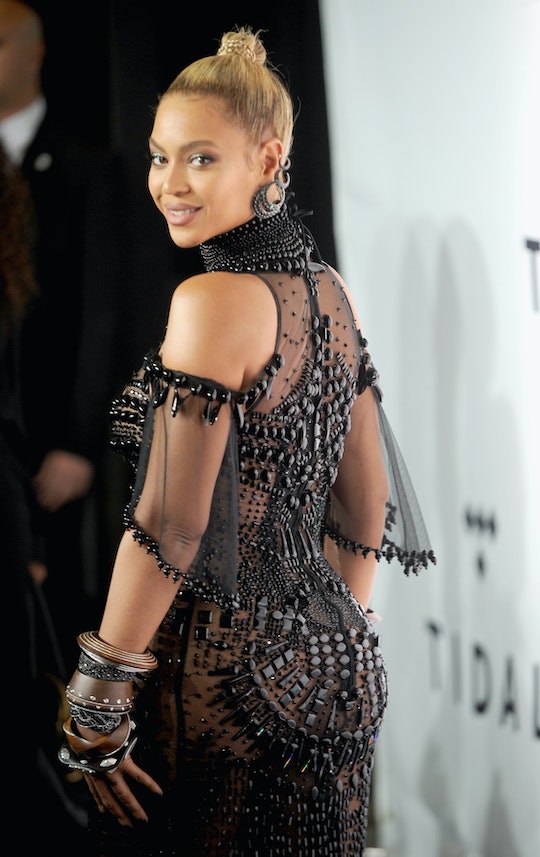 Beyonce Is Pregnant With Twins, OMG

Hold onto your hats, Beyhive, because Queen Bey has a huge announcement. Nope, it's not a new album. Beyoncé is pregnant with twins, and OMG I'm about to faint. For all the Beyoncé fake pregnancy haters, there is no doubt about pregnancy numero dos, because this time, she's got the receipts. The Queen of Slay posted an unbelievably gorgeous maternity photo of herself to her Instagram feed on Wednesday. Backed by an overflowing tower of flowers, Beyonce is draped in a cream-colored veil, wearing a plum-colored bra and light blue ruffled bikini bottom. With the most serene, queenly look ever, she's not just beaming over her baby bump, she f*cking OWNS it in her photo.

"We would like to share our love and happiness," her Instagram caption reads. "We have been blessed two times over. We are incredibly grateful that our family will be growing by two" — *record scratch* hold up — WAT? Growing by two? Someone get me the smelling salts because I just passed out again. Bey Bey is pregnant with babies plural, people. Blue Ivy is about to become a big sister two times over? Can the world handle a double dose of Carter offspring at once?

The news of Beyoncé's pregnancy is like the shining rainbow beacon of joy sung by angels riding dancing unicorns from the heavens above that the world has needed after 12 days of WTF from the White House.

OK, you guys. We get that she's pregnant. We know it's twins. But there are so many more questions that need answers: When is Beyoncé due? Who took Beyoncé's gorgeous maternity photo? Has she told Blue Ivy yet? How has Blue Ivy taken the news? Will they continue the "color + plant" naming convention? Can we expect a Red Rose and Green Apple? Folks, my head is spinning.

And of course, Queen Bey announced her joyous news on the first day of Black History month, a fact that was lost on no one on Twitter. Coincidence? I think not — and even it Beyoncé's pregnancy announcement wasn't timed to coincide with Black History Month, sweet sassy molassey that just makes her even more of a goddess in my heart.

Of course, there is one downside to the news that Beyoncé is pregnant...