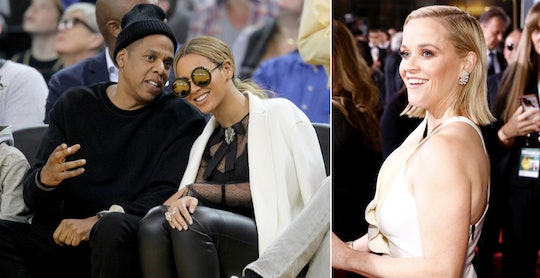 I've always known deep down that Jay and Bey are generous people and I'm happy to report that's 100% true. As it turns out, Beyoncé and JAY-Z sent Reese Witherspoon a case of very fancy champagne and now I need to know how to become part of this friend circle.

While I wouldn't be surprised if Beyoncé and JAY-Z just decided to send their celeb friends a case of bubbles out of the blue, there is a little backstory to this gesture. The couple and Witherspoon, as well as her Morning Show co-star, Jennifer Aniston, had a bit of a moment together at the 2020 Golden Globes on Sunday, Jan. 5. That night, Aniston shared on her Instagram Story that her table had run out of water, so Witherspoon walked up to Beyoncé and JAY-Z to with one simple request. "Reese, this is one of the many reasons why I love you," Aniston wrote on IG Story. "We ran out of water at our table. So naturally, she asked JAY-Z and Beyoncé for a glass of champagne."

And four days later, Witherspoon shared on Instagram that she got "the best surprise" from Beyoncé and JAY-Z in the mail: a box of Armand de Brignac champagne, which Witherspoon shared with her mom, Betty, at 11:30 a.m. "More water...From, Jay & B," they wrote on the card that came with the champagne.

While Beyoncé and JAY-Z skipped walking on the red carpet at the Golden Globes this year, they still made a grand entrance. I mean, they brought their own bottles of Armand de Brignac champagne with them forgoing the alcohol provided by the award show, according to People. But, hey, JAY-Z is a stakeholder in the company, as Forbes notes, which sells a single bottle of champagne for $300, so you can't knock them for supporting their business ventures.

Leave it to JAY-Z and Beyoncé to turn a one-time a request for water into a $300 bottle of champagne. Cheers, indeed.