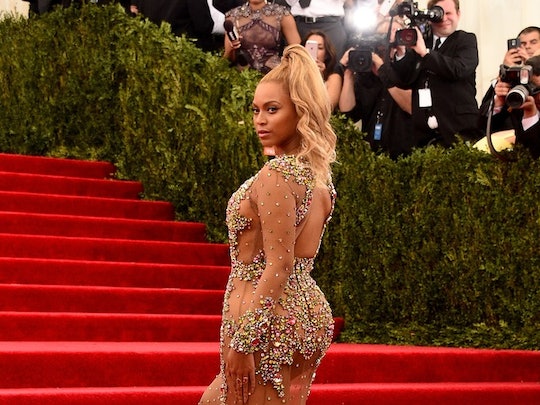 Deep breaths, everybody: there's a rumor going around that Beyoncé might be pregnant again. Calm down! It's only a rumor! But Queen Bey has been recently spotted wearing oversize coats while keeping her hands in front of her stomach, more than once, according to In Touch. And if fans recall, Hollywood Life reported last summer that Beyoncé taught Kim Kardashian to hide her bump with "purses, bags, flowing dresses and coats," which kind of looks like what she was doing after the Golden Globes on Sunday. Or not!

While most fans have never, and will never, meet Beyoncé, and her giving birth to a potential second child has absolutely zero effect on them personally, that hasn't stopped the people of the internet from collectively losing their damn minds, as well as using up all of the question marks and exclamation points we've been allotted for 2016 in just a few days (rude).

While I try not to GAF about the comings and goings of celebrities, I'll admit that I do occasionally get bummed when a star I admire passes away (R.I.P. David Bowie) or divorces (R.I.P. my dreams of going on double dates with Amy Poehler and Will Arnett). So I get it, kind of. Babies are nice to look at (usually), and I get pretty excited when someone I know and love is expecting. So maybe it's not that much of a jump to get excited about the rumored baby of someone you wish you knew? But some people are freaking out just a bit too much. Behold: