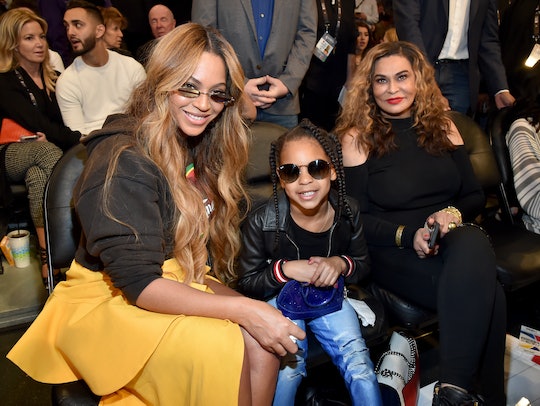 Beyoncé might be sparing when it comes to sharing glimpses into her personal life, but when she does let her fans in it's always totally worth it. Sure, she is one of the most famous people on the planet and only needs one name which is truly the sign of stardom. But that doesn't mean she isn't like the rest of us, taking a moment at the end of the year to share a little recap of all that has happened. Luckily for us, Beyoncé's 2019 recap includes rare pictures of her three kids. Also a jaw-dropping amount of sequined gowns and glitzy parties, but mostly I'm here for those sweet shots of Blue Ivy, Rumi, and Sir.

The Lemonade artist shared her recap for 2019 on Instagram on Wednesday, and true to form her recap was next level amazing. How could it not be when the woman herself is next level amazing? Beyoncé had so many highlights to share in 2019 between starring as the voice of Nala in The Lion King, memories from the NAACP Image Awards or Time 100 awards, her Netflix special Homecoming, hanging out with her husband Jay-Z at Adele's birthday party... or even better, her 7-year-old daughter Blue Ivy's birthday party. Or the second birthday of her twins Rumi and Sir. It's enough to make anyone head's spin.

Bey fans are well acquainted with her oldest daughter Blue Ivy, who has accompanied her parents to several awards ceremonies and even was her mom's date at the premiere of The Lion King. Blue Ivy has even recorded music with both of her parents, in fact. The younger children are a little different, it seems, with very few photos of them made available. Perhaps because they're still so young, Rumi and Sir have been largely kept out of the spotlight by their protective parents. So it was a real treat to see the sweet twins toddling around at their second birthday party. Especially when little Sir was walking around in his special birthday outfit of shorts and suspenders.

The life of Beyoncé is clearly more exciting than most, so trying to whittle down all of her best moments for an end of year highlight reel must have been difficult. But no matter how many awards she wins or songs she sings or concerts she performs, it's clear her heart lies with her kids.

Now we've got the pictures to prove it.