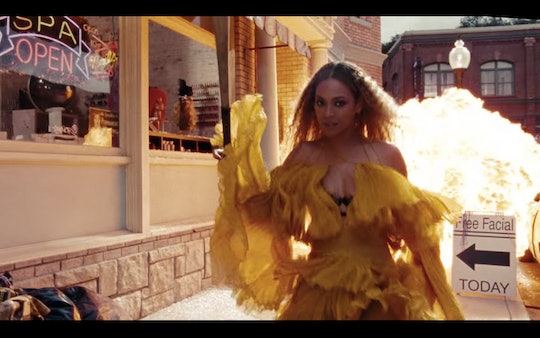 Beyonce's Bat In 'Lemonade' Had A Clever Name Of Its Own

Beyoncé's Lemonade started off with a bang on HBO Saturday night. In a flowing yellow dress, Beyoncé joyously smashed through town, destroying car windows, fire hydrants, and security cameras with a handy baseball bat. While watching, you may have had a visceral reaction of "Yes, Beyoncé, yes!", because it was a pretty cool scene. One detail you might have missed, however? Beyoncé's bat in Lemonade was named "Hot Sauce." Is it just me, or does that little detail make everyone start rethinking Beyoncé's "Formation" lyrics?

In case you've been living under a rock, Beyoncé's now-famous line about hot sauce has made it onto countless t-shirts and totes — and one Democratic presidential candidate even referred to it in a radio interview (although, admittedly, the reception to her comment wasn't as great as Hillary Clinton had perhaps anticipated).

If you haven't memorized the lyrics to "Formation" yet (hey, I'm not angry, I'm just disappointed) and you're not quite sure what this hot sauce debacle is about, here's the basic gist: Beyoncé first sang "I got hot sauce in my bag, swag," in "Formation," and many took it as a statement that reaffirmed Beyoncé's African-American, Southern identity. However, during Lemonade, one shot allowed viewers to see that Beyoncé's baseball bat was named "Hot Sauce." Does this change everything?

I don't know if it changes the original interpretation of Beyoncé's "Formation" — in fact, I think all of Lemonade was a powerful statement of womanism — but I certainly think it adds to it. Beyoncé's not only reaffirming her identity and her roots — she's reminding people that she is a force of nature. She can keep hot sauce in her bag, and also keep "Hot Sauce" in her bag for those moments when she needs to show her strength. If that strength comes from her roots (which seemed to be the theme of Lemonade), I don't see why those two can't be linked.

I might be overthinking it, though (I'd like to thank my high school English teacher for training me to constantly overthink all symbols). Many fans have decided that the bat is just a warning sign for any men or side chicks that mess with Beyoncé.

No matter what explanation you choose to embrace, I think we can all agree that Beyoncé is definitely one bad*ss — not to mention incredibly clever — woman. Is anyone else tempted to rewatch Lemonade and look for other clues and symbols? I have a feeling that if we searched, we'd definitely find a few — it's Beyoncé's way of keeping us all guessing.