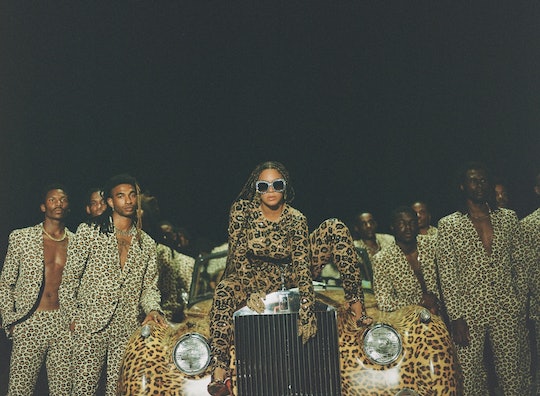 Not only is it guaranteed to be stunning, but the trailer for Beyoncé's film Black Is King on Disney+ reveals that her upcoming visual album is full of gorgeous nods and references to The Lion King. But that's no surprise, of course; Queen Bey's addition to the Disney+ library is inspired by her 2019 album for the film, The Lion King: The Gift.

"You were formed by the heat of the galaxy," Beyoncé says in the trailer for Black Is King, which will premiere on Disney+ on July 31. "What a thing to be unique and familiar. To be one and the same. And still unlike any other."

Black Is King, which took a year to make, will reimagine the lessons from The Lion King for "today’s young kings and queens in search of their own crowns," according to Disney. "The voyages of Black families, throughout time, are honored in a tale about a young king’s transcendent journey through betrayal, love and self-identity," Disney described the plot of Black Is King in a press release. "His ancestors help guide him toward his destiny, and with his father’s teachings and guidance from his childhood love, he earns the virtues needed to reclaim his home and throne."

The trailer is full of gorgeous visuals as well as several references to The Lion King that will make any Disney aficionado even more excited to see the film later this month. For example, the moment when Beyoncé covers a young boy's face with paint in the beginning of the trailer is reminiscent of when Rafiki paints on baby Simba's head in The Lion King.

There are also a few iconic quotes from The Lion King featured in Beyoncé's film. At one point in the trailer, one actor quotes Scar's message to Simba: "Run away and never return." Simba's empowering line "I laugh in the face of danger" and Rafiki's quote to him "The question is: 'Who are you?'" are also teased in the trailer.

In addition to plenty of stunning appearances from Queen Bey herself, the trailer also shows that Beyoncé's husband JAY-Z also makes a cameo as do actress Lupita Nyong'o and model Naomi Campbell.

The film's debut on Disney+ comes one year after the premiere of Disney's live-action Lion King remake, which Beyoncé starred in alongside Donald Glover, James Earl Jones, and Seth Rogen. On June 28, shortly after the project was announced, Beyoncé wrote on Instagram that she hopes people take away something more after watching Black Is King. "I only hope that from watching, you leave inspired to continue building a legacy that impacts the world in an immeasurable way," she wrote. "I pray that everyone sees the beauty and resilience of our people."

According to Disney, Black Is King "is an affirmation of a grand purpose, with lush visuals that celebrate Black resilience and culture" and "highlights the beauty of tradition and Black excellence."

While you wait for Black Is King to premiere on July 31, you can currently stream the live-action Lion King film as well as the original 1994 animated movie on Disney+ right now.