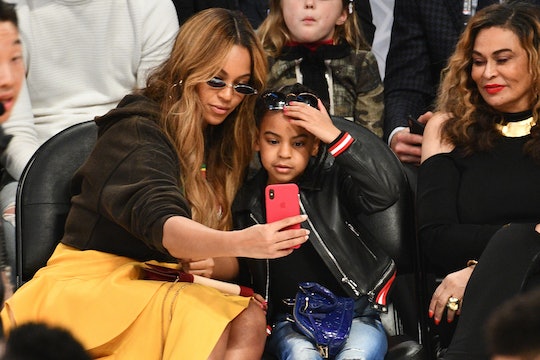 Just when you thought she couldn’t get any cooler, Beyonce’s daughter Blue Ivy told a joke that’s so adorably “corny,” it has the internet LOLing. The 7-year-old’s grandmother, Tina Knowles Lawson, filmed the cute moment and shared it on Instagram, which features the duo as Blue Ivy tells the joke from off screen.

“It’s corny joke time, and I’m here with a very special guest, my beautiful granddaughter,” Knowles Lawson said in the video, which was posted on Sunday. “She actually gave me the joke. So, here it goes!”

After greeting fans with a wave, Blue didn’t hesitate to share her joke with the world. “How many lips does a flower have?” she began by asking. When her grandma asked “Well, how many?” she remarked, “Two lips! Get it? There’s a kind of flower that’s called a tulip.”

“I got it! I got it!” Knowles Lawson responded to the jokester, letting out a chuckle.

Social media followers immediately lost it at the sound of Blue’s adorable voice, which her parents, Beyonce and JAY-Z, have featured in much of their music, including the song “Boss” from their most recent joint 2018 album, Everything Is Love, according to Us Weekly.

Admirers can already see the 7-year-old’s bright future after hearing her voice on the video. “Her voice is so beautiful omg she’s definitely gong to have Bey’s angelic vocals,” one Instagram user predicted. “Blue will be the LEGEND she was born to be and that’s that,” another Instagram follower commented. “I love Blue’s voice, she sound[s] so mature,” one more admirer chimed in. Others also noticed how fast the Blue seems to have grown up recently.

This isn’t the first time Blue has been featured in one of Grandma Tina’s videos for a corny joke. Last July, for instance, Knowles Lawson shared a video from France where Blue, Beyonce, and Grandma Tina were all vacationing at the time, according to Elite Daily.

“Who’s there” both Beyonce and Blue ask from off screen.

As for whether or not Blue is going to fulfill her admirer’s wishes of going into show business and sharing more of her angelic voice, Knowles Lawson has said the young Carter hasn’t decided yet. But her grandma did tell Us Weekly last year that Blue has been performing “since birth” and pointed out, “How could you be in this family and not sing?”

“Whatever she wants to do, she will definitely be able to do it because she’s good at a lot of things,” Grandma Tina said of Blue at the time in the interview.

Whether she becomes a comedian, singer, or follows another dream of hers, one thing is for sure: the entire Bey Hive all already stans for Blue Ivy.