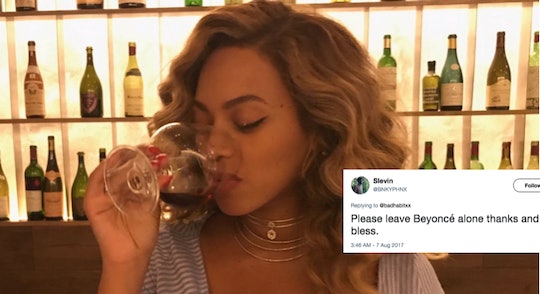 Mom-Shamers Are Coming After Beyoncé Over These New Photos

Hold up, this is not cool. On Friday, Beyoncé posted an Instagram photo of herself looking gorgeous and relaxed while on a date night with her husband Jay-Z. But now, people are mom-shaming Beyoncé for the dumbest reason. In the photo, she appeared to be drinking red wine, and some commenters got into a snit wondering whether or not she was still breastfeeding her twins. Hey mom-shamers: let Queen Bey be!

Beyoncé gave birth to Sir and Rumi back in June, so it's good to see her getting a much-deserved night out to unwind. The comment section on her date-night Instagram filled up with lots of praise and love for her (along with way too many skeezy comments on her breasts). And then came the hordes of shamers, ready to pass judgement about breastfeeding. One user wrote, "If she is nursing the babies, wine ain't good," while another chimed in with, "You feed your children with your breast why do you drink?!" Somebody else asked, "Twins are in formula already?" and gave a thumbs-down emoji.

Luckily, other commenters rushed to defend Beyoncé, pointing out that people had no right to judge because they didn't know her situation, and that she could have easily pumped for the babies before going out to dinner, or used a supplemental formula.

Breastfeeding is one of the most personal things a mother does (or doesn't do), and also one of the biggest targets for shaming. It shouldn't even have to be said anymore, but here goes: sure, breastfeeding has some great benefits, but it simply doesn't work for some women. And formula-fed babies turn out perfectly well too. New moms have enough to worry about already, like how they will ever get a full night of sleep again. There's no need to make them feel worse about themselves with a big pile of unecessary judgement.

Oh, internet. Can't we have nice things? Can't we celebrate one of the greatest music icons of our time without having to pick her apart for her parenting style? At least Beyoncé probably has lots of better things to do than read through all her Instagram comments.

But this is also something that plenty of moms who don't have 105 million followers on Instagram have to deal with all the time, and it's simply not okay.

Let's hope that Beyoncé ain't sorry, because she has absolutely no reason to be.