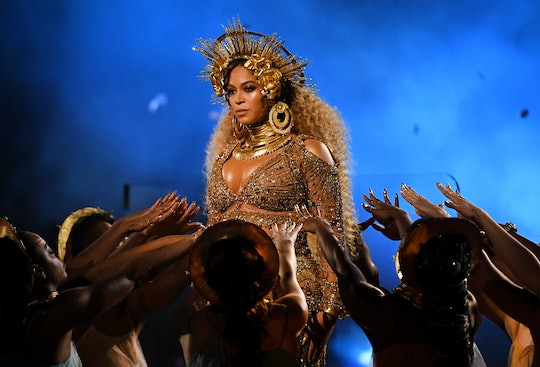 If there is one person in the world who knows how to throw a flawless and glamorous party, it’s obviously Beyoncé. Her epic pregnancy announcement already made our knees buckle and her style while expecting two bundles of joy has been nothing but stunning and fierce. So, clearly, Beyoncé’s push party — also known as a baby shower — was going to be an affair to remember and on Saturday she celebrated her twins' upcoming arrival in style with her closest friends and family, who also happen to be some of the most A-list celebrities out there.

While Lawson's posts on social media on Saturday didn't provide any glimpses of Beyoncé at the party, People reported that the "Formation" songstress "was seen walking around the party with a bare belly and her stomach covered in henna tattoos."

While baby showers can be held at any time during a woman's pregnancy, most typically are held early in the third trimester — usually around 32 weeks. Beyoncé's due date hasn't been revealed yet, but her dad, Mathew Knowles, did give fans a big hint at when they can maybe expect her twins to arrive.

When asked by TMZ to give a "ballpark figure" of his daughter's due date, he confidently answered that they'll be arriving in "more than two weeks from now." That could confirm that her due date is probably not during the month of May and perhaps in June or even early in July. It also means we can still breathe for at least two more weeks, even though the anticipation is still too much to handle.

Meanwhile, E! News reported that Beyoncé was in her third trimester in early May and a source told the news outlet that she is expected to give birth later this month. So the twins' ETA is still very much up in the air.

While nothing has been confirmed by Beyoncé or husband Jay Z regarding an exact due date or the sex of their twins, they are on their way and the world couldn't be more excited for their arrival — and the glamorous celebrations have already started.