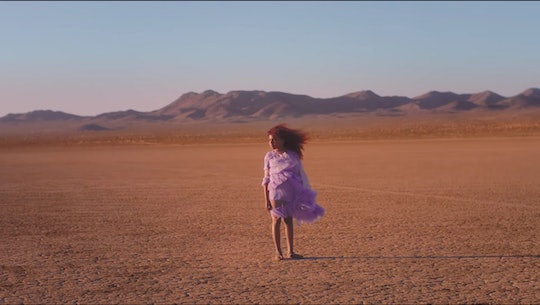 Beyoncé fans woke up Friday to a gift, literally. The singer dropped her latest album, The Lion King: The Gift in conjunction with Disney's release of its live-action remake of The Lion King. And while the whole album is a treat, it's "Brown Skin Girl," the song Beyoncé sings with daughter Blue Ivy Carter, that has fans gushing.

While Beyoncé has worked with a myriad of famous artists her collaboration with 7-year-old Blue Ivy on the track "Brown Skin Girl" may be her fans' favorite. The song opens with Blue Ivy and Saint Jhn harmonizing the chorus: "Brown skin girls, skin just like pearls, best thing in the world, never change it for anybody else." Blue Ivy then closes the track with a short solo rendition of the chorus.

Of course, her work is already garnering significant reaction on social media. "Did y'all hear that run Blue hit during her solo on Brown Skin Girl," one fan tweeted. Others praised the song's empowering message of celebrating beauty in all shades. "The way they're teaching her to love herself and her culture is beyond beautiful," one Twitter user wrote of Blue Ivy after listening to the song.

While Beyoncé and JAY-Z are reported to be very encouraging of whatever their daughter shows interest in doing, a source close to the family told HollywoodLife just last month that it wouldn't be too surprising if Blue Ivy followed her parents into music when she grew up. "It's very clear that Blue has gotten her parents' love for the music and arts," the entertainment news outlet reported the source said. "She's quite talented for a little girl. She is very outgoing, so it wouldn't be surprising if she decided to get more into singing and dancing."

That source stressed, however, that Beyoncé and JAY-Z's main focus was "to raise normal, polite children," not superstars. "They know she's young and has her whole life ahead of her to figure it out," HollywoodLife reported the source said.

Fans first got a taste of Blue Ivy's talent in 2012 when the newborn's cries featured in her father's song "Glory." At just two days old, TIME's Aylin Zafa joked the track made Blue Ivy "the youngest kid officially in the rap game." A few years later, in 2017, JAY-Z included a track of then-5-year-old Blue Ivy freestyle rapping on his album 4:44.

Then, in April, 7-year-old Blue Ivy's rendition of the hymn "Lift Every Voice and Sing," which was first featured on Beyoncé's Netflix concert film Homecoming, landed as a short-but-sweet surprise track on Beyoncé's Homecoming: The Live Album, charming fans with her young talent.

What's more, "Brown Skin Girl" isn't the first time Blue Ivy has guest starred in her mother's latest project, The Lion King. The 7-year-old also made a cameo in Beyoncé's music video for "Spirit," a track from The Lion King's official soundtrack, meaning she's achieved more at seven than many of us do in a lifetime. Both "Brown Skin Girl" and "Spirit" are available on YouTube for you to listen to on repeat.