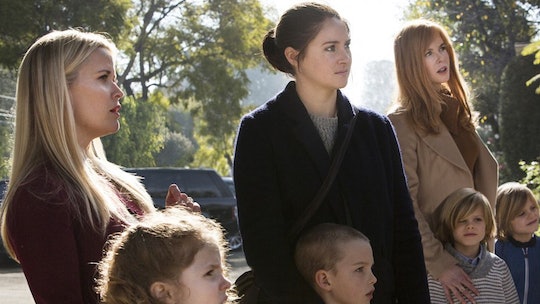 Big Little Lies owned a piece of the 2018 Golden Globes — the power table of Reese Witherspoon, Nicole Kidman, Laura Dern, and Shailene Woodley was hard to miss. On the far side of the awards, the success of the show seems inevitable, but sand it back to its raw beginnings, and it's a story about four mothers dealing with the domestic. Episodes revolved around school drop-off and birthday party one-up-manship and cat fights. It's the kind of prestige show we simply do not see greenlit in Hollywood. Big Little Lies' heart nailed modern motherhood in a way TV never has before. Motherhood asks you: how can you spare your child the shit you have been through? And the answers are at times selfish (throwing a spiteful party), heartbreaking (renting a safe house), and uplifting (dancing around to pop music). Big Little Lies gets at this conflict like no other story I've seen.

No wonder it walked away with four Golden Globes tonight. The trio at the core of the show, Madeline (Witherspoon), Celeste (Kidman), and Jane (Woodley) are unlikely allies: each has a child in the same class at a local elementary school in wealthy Monterey, California. The women of Monterey are hard and aggressive and devoted to their children. When Renata Klein (Dern) discovers a bruise on daughter Amabella on the first day of school, she is outraged, and pins the offense on Jane's son Ziggy. Alliances form: it is the Madeline, Celeste, and Jane axis against Renata and her boosters.

It is so easy for Renata to speak out about her daughter's bullying — a no-brainer, unacceptable. But Amabella's unwillingness to disclose the name of her bully propels the mystery along and suggests an analog in each of the mothers. As Dern said in her acceptance speech for best supporting actress, her character was, "Terrified because her little girl was being abused and bullied and she was too afraid to speak up." It's the culture we all know. Jane brings unspoken trauma to the coastal town, and Celeste is hiding a private pain of her own.

The series open features shots of a rabid Pacific Ocean devouring the shore. There is the constant sense of vulnerability, of a looming threat. All the women on the show are better at perceiving that threat as it pertains to their children: they plan elaborate birthday parties (or, in Madeline's case, a not-a-birthday trip to see Disney On Ice as a boycott of Amabella's birthday), they find ways to get their children to open up, afraid of what they might find when they pry their feelings open, and they throw their fists at other moms in defense. They are, above all, willing to sacrifice themselves for their children. Their emotional intelligence is lofty... until it comes to their own relationships.

We all want better for our children. We want them to avoid our mistakes and for their world to be safer than ours. The beauty of Liane Moriarty's story is that is presents four families for whom that urge plays out differently. For Celeste, the threat isn't outside of her family, it is her family: her husband Perry is violent; she endures the abuse out of disbelief, or a conviction that she can shelter her sons from harm if she stays. But of course, everything filters through to them. Our children see all.

For Jane, her son is the relic of a rape; here the conflict between love and horror is most dramatic. Mothers traffic in fantasies of unimaginable horror — it's what we do, some terrible but quite effective survival strategy! — but Jane has already lived through a nightmare.

The mothers each represent a facet of everyday motherhood: they juggle work and partners and obligations, and navigate a constantly eroding landscape — their children themselves. Even if you haven't found yourself in an abusive relationship or spending your days drinking seaside lattés (and eating chocolate!), you will see the push-pull of forces on mothers everywhere. The worry that every little fuckup you make will have an echo in the life of your children.

It's a lot to handle. But the sparkling heart of the show is that those other mothers around you, dealing with the same prickly thoughts, are your sisters, your allies, your besties. As it turns out, you aren't raising these kids alone.