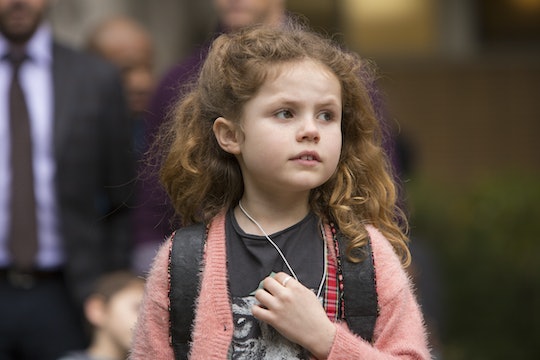 My stepdaughter likes to lie. I’m not talking spiteful, damaging lies. But she understands what it means to play a trick on someone by telling them the opposite of the truth. She calls her other mom and giggles, bragging that she’s someplace like the park or the pool while she’s sitting at our dining room table eating dinner. These little lies she tells are rooted in the truth that she wants a reaction out of the person she’s speaking to. I have also seen my stepdaughter’s friend casually throw around the fact that her parents frequently talk about divorce. I’ve seen another of her friends mention some pretty scandalous details of the life of a confidential client of said friend’s parent. On a lighter note, my stepdaughter also tells me every “secret” my wife asks her not to, like what she wants to surprise me with for my birthday. Second graders are precocious, to say the least. Some might say the second graders of Big Little Lies’ Monterey are even more precocious than your typical 8-year-old. But one thing is true, they cannot and should not be expected to keep an adult’s secrets.

The children of the Monterey Five are painted like tiny caricatures of their parents. Ziggy (Iain Armitage) is the shy, withdrawn boy who strives to keep his struggles unseen, just like his mother Jane (Shailene Woodley). Amabella (Ivy George) reminds us that the Kleins’ enormous glass house is testament to the family’s fragility. Celeste’s (Nicole Kidman) twins have begun to solve their problems with brute force just like their father, beating up a bully and calling their mother a bitch, but also have the fierce need to protect the ones they love. Sweet, unassuming Skye (Chloe Coleman) constantly tries to blend in and care for those around her as Bonnie (Zoe Kravitz) sits by her abusive mother’s bedside. Chloe (Darby Camp) whispers to her classmates that Perry is Ziggy’s father while Madeline (Reese Witherspoon) gossips on the phone about everyone in Monterey.

These kids and their actions seem over the top and exaggerated. Chloe has a cellphone. Amabella has a disco party with more adults with martini glasses than kids with candy. But is the show’s depiction of these kids really that far off? Amabella passes out in the closet over her severe anxiety around climate change.

Kids don’t miss a thing, even when you try to hide it.

Just a few months ago my stepdaughter realize that the salmon she loves so much in her sushi is the same salmon that swims in the sea. So she proposed putting signs in all of our neighbors’ yards that say “Please don’t kill animals for food.” She still wanted to eat salmon though.

Chloe spilled the beans on Ziggy’s father, and on the surface it seemed like a melodramatic plot device to get the news circulating and also to draw parallels between Madeline and her daughters. Chloe dishes about Perry, and Abigail drops the ball on Madeline’s affair in front of Ed, all to allow Reese’s character to finally realize she isn’t bulletproof. It seems absurd, doesn’t it? If you have a second grader in your house, not really.

Kids don’t miss a thing, even when you try to hide it. I’ve seen affairs nearly exposed because a child calls a man the wrong name. I’ve had my stepdaughter ask me the next day why I was sad when I thought I was crying so quietly over a negative pregnancy test I thought even someone sitting next to me wouldn’t be able to hear.

One of the most honest things Big Little Lies does is depict the second graders of the show as wind vanes for every movement, action, habit, tone, and interaction of their parents. They are desperate for relationships, security, attention, laughter, and safety. They see us telling our friends and partners our secrets because we trust them and they make us feel safe. In turn, our kids create a bubble around themselves and their peers. They tell us they’re at the pool when they’re at the dining room and then dish our deepest secrets to their 8-year-old besties because we’ve shown them that’s what people do.

The children of Monterey have borne witness to the pivotal moments of Season 2: Chloe alone knew when to go to Ed to give him a hug, seeing him in need of release; Chloe and Abigail were the only witnesses at the vow renewal between Ed and Madeline in the finale; Ziggy is able to tell Jane she loves Corey (Douglas Smith) before she understands it herself; Celeste won her custody hearing with smartphone footage of Perry beating her up — a moment that was filmed in secret by her boys. Throughout Season 2, we have been led to believe the police detective, or Mary-Louise, are watching the Monterey Five — and that they pose a risk — but in fact it was the children who saw everything, and the children who saved the day.

When Madeline confronted Chloe about telling Ziggy about his father, she was wearing a pair of green pajamas with colorful clouds on them. My stepdaughter has those same pajamas, they’re from Target. In the moment when I saw Chloe, I thought of my stepdaughter and how noble she would feel by telling her friend something she thought they needed to know, because she felt loyal to them. The adults of the show might turn the drama up higher than the sun in California, but the kids of Monterey know that secrets you keep become lies that are ultimately too big to handle.