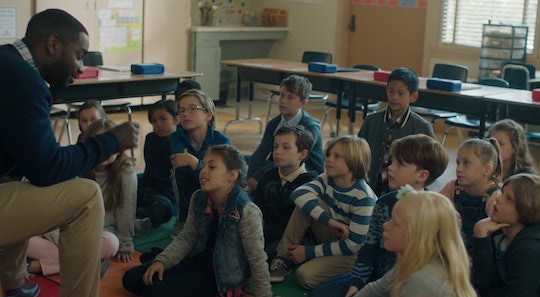 The 'Big Little Lies' Kids Are Traumatized — But How Do We Talk About Climate Change?

Climate change is a hot-button topic among many concerned people, no matter where on the political spectrum you fall. Even if you're not actively discussing the issue in your own home, it's a relevant subject that is no doubt going to come up at school at some point during your child's education ⁠— and this exact scenario recently took center stage on Episode 3 of Big Little Lies. Because climate change can lead to stressful discussions about how our planet is evolving, teaching kids about climate change without causing anxiety is of the utmost importance.

Allow me to set the scene for you, in case you haven't yet watched Episode 3, or need a refresher. During a discussion of the book Charlotte's Web, Mr. Perkins, the second grade teacher of the Monterrey 5's younger kiddos, ties the storyline of the classic children's novel to global water consumption. He stops mid-sentence when explaining how not slaughtering Wilbur the pig will save thousands of gallons of water, as he notices Amabella's tiny silver boots peeking out from the inside of a classroom closet.

While they don't actually show Amabella's panic attack, a quick scene cut to the aftermath at a hospital shows a typical Renata tirade as she interrogates both Mr. Perkins and the emergency room doctor. The doctor explains that Amabella was given mild sedatives for an anxiety attack as Renata immediately blames Mr. Perkins by shooting him a staggering "What did you do?" comment.

So, what did he actually do? I spoke with Dr. Kathryn Smerling, PhD, a family therapist practicing in New York, about this scene and how to address climate change with children in a constructive way. "To catastrophize is always scary for a child, so you have to present things with a calm voice and also don’t make it the worst it could possibly be," she says.

Dr. Smerling wants parents to understand that although climate change can be a distressing topic, Amabella's panic attack may have had more to do with the anxiety in her household than with her worries about climate change. "The other thing with Amabella is that you just can’t discount the anxiety not only being posed by climate change, but what was going on in the house at the time ⁠— the psychological atmosphere of the house is that she must be incredibly anxious due to the conflict between her parents and her father perhaps going to jail. So, I think that you could blame it on climate change, but you also have to look to see what the daily environment of the child is."

The kids in Monterey are decidedly more adult-acting than any second grader I've ever known, and they're admittedly dealing with a lot of drama. Ziggy's astute observation about Charlotte's character in the book concluded that she was "lying to protect someone she loves ⁠— that's what grown-ups do" and Chloe's quick quip that Charlotte was simply "re-branding" Wilbur to save him speak to the fact that these kids are living in a world where they are being exposed to adult theories at a younger age than perhaps the previous generation.

To provide a little real-world comparison to the Big Little Lies characters, I surveyed the kids in my own home about climate change. My stepchildren (ages 10 and 13) had an understanding of the future consequences our planet faces that was rudimentary at best, and was mainly based off of what they had learned in school about climate change. My son, who is about to enter second grade, seemed to have no clue what we were talking about, but did understand concepts such as recycling and water conservation. During our conversation, none of my own children seemed to experience the existential dread that caused Amabella to have a panic attack, but they seemed to all know that conservation is important and doing their part to help the planet is necessary.

Dr. Smerling tells Romper there are ways to talk about climate change in a way that does not promote anxiety. "You can say, 'This is whats happening and you can do something to help the environment and help the climate, but we are all working to help it.' Put a positive spin on it. Make it proactive — something the child can do versus what is being done to the child. Maybe you could start a bit of a recycling campaign, or you could do something with a supermarket to make them more aware of recycling. There are things that can be done. Write a letter to your congressman, your senator, write a letter to the president."

This reassuring attitude is one that parents can adopt in order to help children understand the dangers of climate change, while helping them also understand that there are certain ways they can help impact the future of the world.