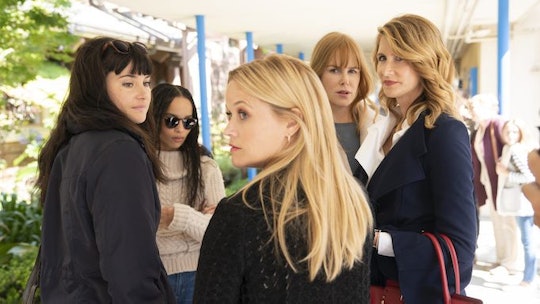 "These are my babies. I am their mother. And I have protected them against all odds." So went Celeste's (Nicole Kidman) closing argument in the custody hearing for her sons Josh and Max in the finale of Big Little Lies, and a line that summed up the entire season season.

"They are good boys, and I will raise them to be good men. They will be good men," she told the judge, who was happy for impromptu speeches like this to happen during proceedings provided it got us to a satisfying finish. Which it did. Big Little Lies: Motherhood on Trial was a hit in my book, from the opening moments of the season when everyone put on their best school drop-off outfits to go squawk about the quadrangle again, to the closing moments when Celeste took her kids and her iPad home for good. All of the most fabulous theories about the show's end turned out to be flotsam, but you have to appreciate the way the show built what I will call a ~mood argument~ for mothers.

It began in episode 1, when Celeste and Madeline headed to their new favorite coffee house, an outdoor patio shaped like an eagle's nest, populated by what I can only describe as wicker bird's nests.

The great surprise, right off the bat, was that Mary-Louise (Meryl Streep + teeth) was occupying a piece of the nest — was squatting on someone else's eggs, essentially. In a brief spat with Madeline ("you're very short"), we learned that she was on the hunt to find out what happened to her son, Perry (Alexander Skarsgård), but the general feeling planted in our suspicious stomachs (which were very much in need of a muffin at the time) was that she was looking for someone else's chicks to replace her own.

In episode 2, Jane counseled Celeste about the very uncool hen in their midst who refused to stop sticking her orthodontic beak into everyone's business (I mean Mary-Louise). And eventually, we learned that she was challenging Celeste for custody of the twins.

Throughout, the show gave us numerous visual cues around the capacity of these women to mother. We return to the nest again and again and again. We get Bonnie (Zoe Kravitz) cuddling Skye (Chloe Coleman):

Here's Bonnie's mother Elizabeth (Crystal Fox) [very creepily] paying her daughter a visit during the night (tellingly, poor Nathan, played by James Tupper, is really the only husband to make one of these fundamental bed scenes, but totally silent and irrelevant):

A good one of Jane (Shailene Woodley) cradling her son Ziggy (Iain Armitage), about whom we are never too worried because he is already the best kid between Half Moon Bay and Los Angeles, with the emotional range of a preternatural Keanu Reeves:

There is the great scene of Chloe (Darby Camp) in her pajamas, awake to what is going on between her parents, and an early encounter between Madeline (Reese Witherspoon) and her older daughter Abigail (Katherine Newton) — the kind of gnarly conversation that can happen when a mom encroaches into the adolescent's space.

And of course there is the below shot of Celeste looking after her little chicks one night. It is the scene where they are discussing the fact that Grandma wants to take them away. Max and Josh (Cameron and Nicholas Crovetti) ask their mother if they should say they hate their grandmother, and if they should say they want to stay with their mom. It's a scene where the power balance shifts curiously from the mom to the first-graders in the bed. One of the twins promises the two will protect her. "You do not need to protect me," she replies, and the moment foreshadows her finding her lawyerly voice to absolutely yank Mary-Louise's tiny scarf in court, to speak symbolically.

The horror we pan back to at the beginning of all seven episodes is the moment after Bonnie has pushed Perry down the steps onto the wet concrete (that traffic cone toppling over the next flight!). The characters take it in with slight variations each episode — looks of surprise, shock, and realization — but it isn't until we understand Mary-Louise fully that the shot slots into the new concern. Looking down the steps, legs akimbo, Perry looks like nothing so much as a baby bird fallen from its nest.

That is what Celeste uses to win her case — the fact that Mary-Louise had two sons and parented them poorly enough that both were dead. It's a killer move, but I'd expect no less of a magpie like Kidman (with the accent to boot). More broadly, it's a forceful response to all the ridiculous criticisms lobbed at all mothers ("Are you perfect? No. Am I perfect? No!" exclaims Madeline).

Where I am from, when spring rolls around, parks workers put signs up on trees to warn you about ornery magpies in the area guarding their young. If you so much as stroll along a sidewalk near a magpie's nest, she will swoop down to peck your actual skull — memories of that last-second wing flap over my head still give me shudders. The solution is to walk with a tall stick hoisted over your head, but the lesson is: do not mess with moms.

We are given one brief view of birds soaring over the ocean right before Celeste wins her case — one darts down to catch a fish for her young. The point, from the very start, has been a vigorous defense of us all.