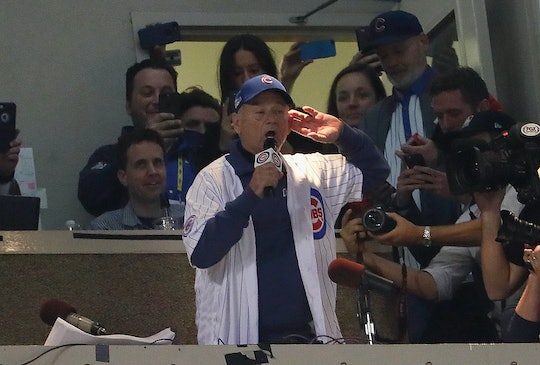 If this week wasn't already one to be the best of their lives, a few of the Chicago Cubs appeared on Saturday Night Live to not only dance as strippers in one of the skits, but also to be surprise guests on the Weekend Update with Bill Murray. And when Bill Murray and the Chicago Cubs sang on Saturday Night Live, it was a moment viewers won't soon forget. In the song "Go Cubs Go," the quartet belted out lyrics in celebration of winning the World Series and they had every right to be proud of their feat.

However slightly off-key it might have been, watching Bill Murray perform with the Cubs on SNL was kind of everything. When the Cubs faced off against the Cleveland Indians in the World Series, ending with game seven on Wednesday, Nov. 2, it was the first World Series win for the Cubs in 108 years, so besides celebrating the big win for their city overall, it was a huge accomplishment that apparently ends up coming once every 100 years for some teams.

It made total sense for avid Cubs fan and Chicago native like Murray to be up on-stage with the Cubs, singing on SNL for his hometown team that brought home the World Series championship less than a week before.

Along with Murray, Cubs players Anthony Rizzo, David Ross and Dexter Fowler performed on Weekend Update and pretty much killed it for Cubs and baseball fans everywhere. Even if you aren't a baseball fan or into watching sports at all (which I totally don't fault you for), it was hard not to follow the 2016 World Series between two teams who hadn't taken home the win in years. But the Cubs's history of not winning a World Series championship in over a century made the victory all the more sweet, so it was totally appropriate to have the Cubs and Murray sing in celebration of that fact on a major platform like SNL.

Murray, a notable Cubs fan, was recently given the honor of singing "Take Me Out To The Ballgame" at game three during the World Series", as a way of paying tribute to his favorite team. So bringing him back to SNL to sing with the Cubs was nothing if not super current.

During a time when politics have succeeded in dominating not only primetime TV, but also SNL as a whole, it was refreshing to see something good and pure being celebrated as the Cubs and Murray made their appearance on Weekend Update — and basically serenaded us with their recent victory.