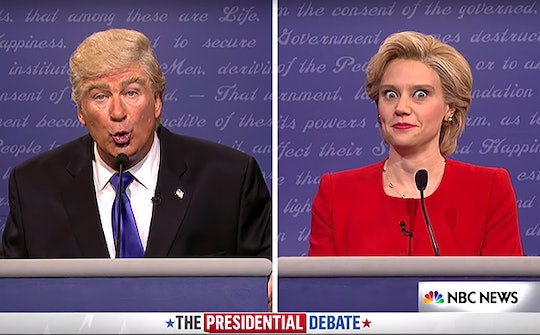 On the last Saturday Night Live before the presidential election, there was yet another political cold open. But at this point, Kate McKinnon and Alec Baldwin have been killing it so hard that no one's complaining. This time, the Saturday Night Live cold open about the election urged everyone to get out and vote, and it was basically a newer, even better version of the "rock the vote" campaign from years ago. But before the impromptu PSA about getting out and voting (come Election Day), the SNL cold open had a lot more to say.

It started with a CNN interview with both McKinnon's Hillary Clinton and Baldwin's Donald Trump, talking about the latest Clinton e-mail claims, while cleverly ignoring every terrible Trump moment that arisen throughout the campaign. For example, when Baldwin's Trump denied his connection to Vladimir Putin only to kiss him on-screen — with the CNN interviewer quickly turning a blind eye — fans saw a dismayed Clinton once again forced to address her secretive e-mails. Additionally, viewers also saw Baldwin's Trump kissing a member of the KKK and a random FBI agent, who he claimed to know nothing about just seconds before.

Soon after, Baldwin broke character (which I will forever love him for) and joined the scene together with McKinnon's to make a bigger point about the upcoming election.

Baldwin and McKinnon held hands as they rushed off the stage and out into Times Square, with Arcade Fire playing in the background in a perfectly uplifting montage of inspiration. They proceeded to run through Times Square, doing away with the ickiness of what has been an admittedly messy campaign, hugging supporters of the opposite parties and effectively letting loose together.

When they returned to the SNL stage, still holding hands, they gave an important message about the upcoming election. They told America to get out and vote and take into their own hands what the future of the country will be and who will be leading us. And they're not wrong, because it is literally up to all of the voters to decide who will be the next leader of the country.

Seeing Baldwin and McKinnon break character on SNL in order to play out a cold open that was still political gave a more important message than just making fun of the media's inconsistencies with both of the candidates and the scandals surrounding them. I'm going to miss these political cold opens on SNL, but the last one before the actual election was used wisely, urging America to get out and vote and utilize their right to take part in an important election.