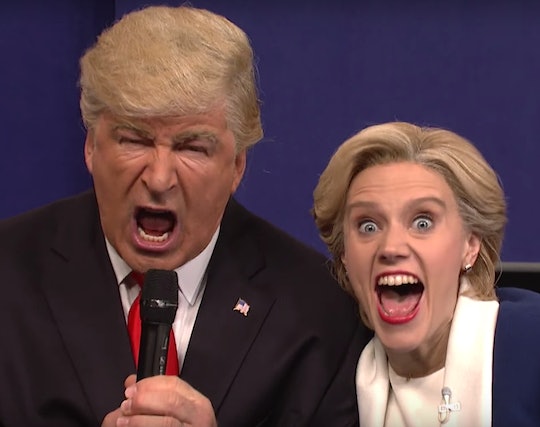 'SNL's Trump & Clinton Debate Is So Accurate, It Hurts

Considering the unprecedented heights of insanity that the 2016 election season has introduced to the American public (and, embarrassingly, the rest of the world), it's tough to imagine that comedy could even adequately harness the madness. So, the good people at Saturday Night Live didn't even have to stray far from the material real life already provided in parodying last week's second presidential debate. From Hillary Clinton attempting a "casual lean" and to Donald Trump ominously stalking her onstage as she answers a serious policy question, SNL's Trump and Clinton debate is so, so accurate.

That's why it doesn't seem far-fetched at at all that the hilarious skit opens with the debate's moderators, Cecily Strong as Martha Raddatz and Alex Moffat as Anderson Cooper, open the debacle by taking a shot, just as many weary at-home viewers of the actual debate undoubtedly did. "Let's get this nightmare started," Raddatz says, before introducing "President" Hillary Clinton.

The spoof unfurled in much the same way that that actual debate did, even an alien unanointed in the in the devolving realm of American presidential politics would have been sure it was all an elaborate fabricated joke — especially when Raddatz pointed out that the country had heard Trump reportedly brag on-tape about kissing and groping women without consent.

"Listen, what I have done is nothing compared to what Bill Clinton has done, OK?" Alec Baldwin's Donald Trump replied. "He has abused women, and Martha, Anderson, hold onto your nips and your nuts, because four of these women are here tonight. Four of them."

An ever-prepared and totally unflappable Clinton, played by Kate McKinnon, reacts by feigning an exaggerating meltdown at the idea of her husband's accusers gathered in the audience. "How will I be able to go on with the debate?" she laments, her face contorted with faux anguish. "Now, I'll never be able to remember my facts and figures now!"

But then she delivers the most badass line of the night: "Get real," Clinton says. "I'm made of steel; this is nothing."

The Trump campaign has, of course, announced it would attempt to launch a smear job on the former president to remind the country of his own alleged affairs and accusations of sexual assaults. In addition to deliberately disregarding the fact that Hillary Clinton, not Bill, is running for president, that approach makes the foolhardy mistake of ushering the barrage of accusations of sexual assault that have emerged against Trump in the week since the real-life debate.

"Martha, she is trying to silence these women, but they need to be respected," SNL-Trump says. "They need their voices heard."

"What about the women accusing you of sexual assault?" Raddatz asks.

"They need to shut the hell up."

From there, Baldwin as Trump went on to inadvertently explain the scene at one of his own rallies ("Everywhere I looked, there were violent, crazy people and a lot of them had guns."). And McKinnon's Clinton did her very best to compare her failed "trumped up, trickle down economics", would-be tagline from debate no. 1 with Michelle Obama's much-praised Democratic National Convention speech line "When they go low, we go high"("Just a couple of equally famous quotes from a couple of equally lovable women.").

The real-life breakout start of the debate, undecided voter and red sweater wearer Ken Bone, also made a cameo — this time to dance, because, as Raddatz said, "everyone has been so good."

If that doesn't motivate the American people to get out and vote on Nov. 35, as SNL's Trump implored his supporters to do, I don't know what will.