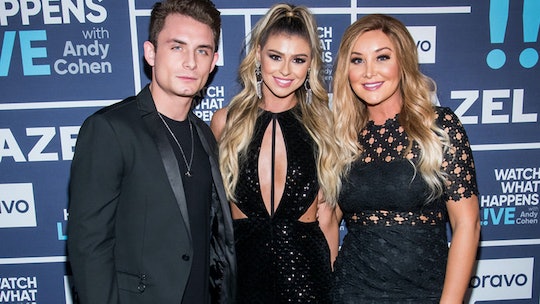 You Should Be Following Billie Lee's Instagram From 'Vanderpump Rules'

Fans of Bravo's Vanderpump Rules have been buzzing about Billie Lee since her SUR debut in Season 6. Although she has made strides by hosting a brunch called Brunch with Billie Lee and found friends among her fellow SURvers, the reality star has had her fair share of drama on the show, including an altercation with Lisa Vanderpump herself and an ongoing thing with co-star Lala Kent in Season 7. Now, fans are more curious about the transgender activist than ever. And despite the cloud of drama over the Bravo series, Billie Lee's Instagram proves that the Vanderpump Rules star has more to give fans than some spilled tea.

Since she first appeared on the Bravo show, Billie has been upfront about who she is — and it's no different on social media. In her Instagram bio, Billie describes herself as a lover, believer, Yogi vegan mediator, blogger, hippie wannabe, and transgender activist. She also gives a brief shout out to her role on Vanderpump Rules. Nonetheless, the reality star uses her social media platform for the greater good. Billie weaves motivational quotes, pictures captioned with inspirational messages, and sprinkles of her everyday life, to seamlessly lace a bit of encouragement and activism into your feed.

It's well-known that Billie is the first openly transgender cast member on Vanderpump Rules.

"I'm grateful for the opportunity," Billie told Bustle when she first appeared on Pump Rules. "I really don't mind answering questions or telling my truth."

She has since made it clear on the show that she wants to make the world safer and more inclusive for trans individuals. That being said, you'll still see a few familiar faces from the Vanderpump Rules cast on Billie's Instagram.

Although Billie doesn't post photos with her cast very often, when she does, there's always a purpose. Although Lisa and Billie seemed to get in an argument in a preview for the April 8 episode of Vanderpump Rules, a recent selfie on Billie's feed shows that the two are doing just fine.

In the caption, Billie wrote, "I don’t normally ask the queen for a selfie but I am so damn proud of her. @lisavanderpump you inspire me everyday. A true goddess that keeps taking it to the next level every time. You amaze me with your dedication and attention to detail. @vanderpumpvegas is incredible. I’m so happy we have a new Vegas home to sneak off to." Billie also used the hashtag "#fairygodmother" to end her post.

It's also no secret that Billie has remained good friends with James Kennedy on Vanderpump Rules. While this has caused some tension with other cast members, namely Lala, it's clear that she continues to work with and be friends with James.

In the past, Billie shared a number of photos with James (and occasionally Raquel), featuring events they have attended together. In June, Billie posted a picture with James at SUR's '80s Pride event. Then in August, she shared a picture from a Skybar event with her "favorite boo pie." In February, Billie posted pictures with James and Raquel from their time on Watch What Happens Live With Andy Cohen.

Vanderpump Rules might be filled with tons of drama, but Billie's Instagram feed sings a different tune. So if you're looking for more motivation in your life when it comes to the LGBTQIA+ community and positive affirmations, go ahead and check out her feed.