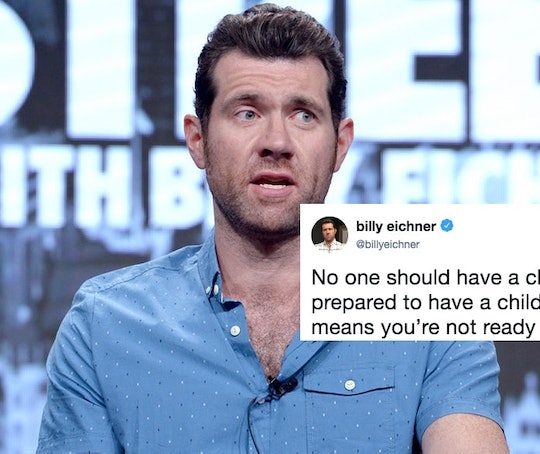 For those of you who might not have heard, comedian Kevin Hart has been having something of a moment — and it's not a great one. The wildly popular comedian was slotted to host the 2018 Oscars but has since bowed out amid a massive media frenzy over some older unearthed homophobic comments found on Twitter. As the comedic community continues to weigh in on the nature of humor and political correctness, it seems to me that exactly one person has gotten to the real heart of the issue: the hilarious Billy Eichner from Billy On The Street. In fact, Eichner explained parenting an LGBTQ child in the most perfect tweet, because at the end of the day, the issue isn't really about comedy. It's about loving your children, period.

Eichner took to Twitter several times to discuss Hart's seemingly homophobic tweets and comments, one of which came from a 2015 Rolling Stone article quoting a 2010 stand-up riff where the comedian said he hoped his son would not be gay.

"One of my biggest fears is my son growing up and being gay. That’s a fear. Keep in mind, I’m not homophobic... Be happy. Do what you want to do. But me, as a heterosexual male, if I can prevent my son from being gay, I will," Hart told an audience in 2010, according to Rolling Stone.

Earlier this month, Hart eventually to Instagram to apologize for his words, saying he regrets potentially hurting "the LGBTQ community for my insensitive words from my past," as reported by Wired.

Unfortunately, the damage was done, especially since Hart had refused to apologize for days beforehand, as Cosmopolitan reported. And it's possible people found his inclusion of his son's possible sexual orientation in his routine tasteless, despite it happening years ago. Romper's request for comment on the backlash from Hart's representatives was not immediately returned.

And if you're wondering what the one and only Billy Eichner had to say about that, he responded perfectly.

"No one should have a child who’s not prepared to have a child that’s LGBT," he wrote on Twitter. "That means you’re not ready to be a parent. Not a good one anyhow. So if ur someone who’d be 'disappointed' by that, you have a lot of work to do on yourself before bringing a human being into the world."

It bears noting that Hart is a father to three children: 13-year-old daughter Heaven, 11-year-old son Hendrix, and 1-year-old son Kenzo. And to be fair, Hart did admit in his Rolling Stone interview that he did, indeed, regret his choice of words five years later.

"Not that I’m not gonna love my son or think about him any differently. The funny thing within that joke is it’s me getting mad at my son because of my own insecurities — I panicked," he said, according to Rolling Stone. "It has nothing to do with him, it’s about me. That’s the difference between bringing a joke across that’s well thought-out and saying something just to ruffle feathers."

Eichner, on the other hand, is not a father. But he so clearly understand the profound and simple truth of parenting that it bears repeating and sharing.

And Eichner's fans took to Twitter to share their own beautiful messages about parenting in a way where children feel nurtured, accepted, and seen.

Billy Eichner has proven that being funny and being inclusive do not have to be mutually exclusive. And he managed to prove that with just one well-worded, thoughtful tweet.

Now that the Oscars are looking for a new host... perhaps they should look at Billy Eichner.