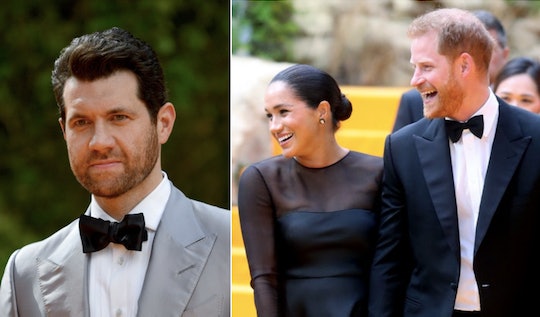 Even very funny and very famous people get nervous when meeting royal superstars. In fact, during a meet-and-greet that took place at the London premiere of The Lion King, the one and only, super hilarious Billy Eichner was seen freaking out about meeting Prince Harry and Meghan Markle. In a video of the sweet moment, Eichner is literally all of us, should we ever be blessed with such an opportunity.

The meeting took place on Sunday afternoon, July 14, and Eicher was caught on video in a nervous moment. He turned to the person next to him, later revealed to be co-star Seth Rogen, and rehearsed his greeting. “[I’m going to say] pleasure to meet you. I’m gonna say it, I’m gonna say it,” he said, according to People's transcription of the muffled conversation. “Keegan didn’t say it,” he added as he watched Keegan Michael-Key shake hands with Prince Harry, the Daily Mail reported.

Eichner later tweeted about the moment with the caption “OMG Here I am completely freaking out to @Sethrogen about how I’m going to greet Prince Harry and Meghan I’M CRYING.”

Eichner added in a follow-up tweet that the moment was magical. “BTW they were both super down to earth and lovely and Meghan and I talked about our @NorthwesternU acting teachers (shout out to Mary Poole and David Downs!)," he wrote on Twitter.

Another video shows Prince Harry briefly shaking Eichner’s hand before moving on, while Markle stopped to engage in conversation. And for the record, it does sound like Eichner's prepping paid off, as the phrase "pleasure to meet you" can vaguely be heard in the audio of the video.

Eichner wasn’t the only celebrity who made headlines for his brush with the royals; one long-anticipated moment for fans was seeing Beyoncé and JAY-Z greet Prince Harry and Markle, which fortunately happened on Sunday night.

Beyoncé, who voices the character Nala in the film and has three children herself, was heard gushing about Archie to the Duke and Duchess of Sussex. “The baby, so beautiful. We love you guys,” Beyoncé told the new parents, according to Vogue. For their part, the royals shared that the little one is growing and is now able to hold up his neck, according to People.

Eicher joked about Beyoncé’s overall perfection with a tweet in which she is the only person looking the right direction in a photo. “Of course @Beyonce is the only one of us who found the right camera,” he wrote.

Ahead of Sunday night's premiere, Eichner, who voices the character of meerkat Timon in The Lion King, spoke to The Hollywood Reporter about how he handled taking on such an iconic role, saying: "Whenever I got intimidated by the scope of the movie or the fact that it already is a classic, I just thought that Jon Favreau is a brilliant director, he knows how to make a spectacle feel very human and very organic and very real and genuinely funny.” Eichner added in the same interview that it helped a great deal to record alongside Seth Rogen, who voices warthog Pumbaa, as they could lean on one another to mine comedy gold.

That’s something Eichner is really good at, as evidenced even in his incredibly relatable mini-freak-out at the premiere. Don’t feel bad, Billy, we’d all be right there with you!