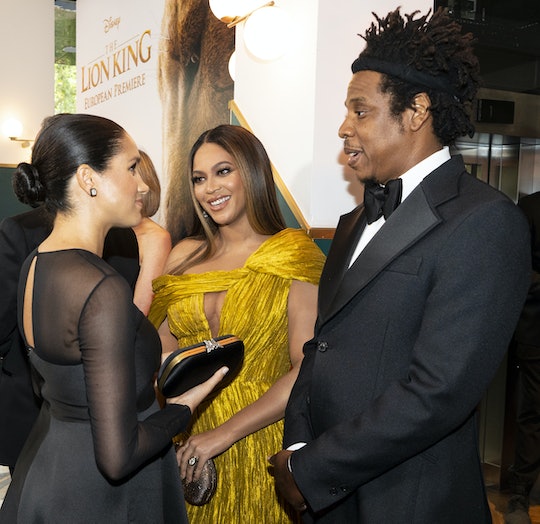 Beyoncé Can't Help But Aww Over Baby Archie, Just Like The Rest Of Us

Last night, across the pond, the universe aligned to bring fans one of the greatest and most spectacular meet-and-greets in history. At the London premiere of The Lion King on Sunday, Queen Bey met the Duchess of Sussex and, of course, they exchanged pleasantries and, yes, even a hug. But the best moment of all is absolutely what Beyoncé said to Meghan Markle about baby Archie because it was, as you might expect, the absolute sweetest.

Beyoncé, who voices Nala and sings several songs in the live-action remake of The Lion King, was at the premiere with her husband JAY-Z. On the red carpet, Markle and her husband Prince Harry were seen chatting with Bey and Jay, and as royal correspondent for The Sun, Emily Andrews, shared on Twitter, the couples "greeted each other in a very friendly way, suggesting they’ve all met before."

According to Andrews, who shared a video of the moment the power couples were talking together and a transcription of the audio on Twitter, Beyoncé "cooed" to Markle about baby Archie, who was born on May 6. "The baby, so beautiful. We love you guys," Beyoncé told Markle and Prince Harry, according to Andrews' reporting.

The couples apparently talked parenting almost exclusively, with different videos shared on social media capturing other snippets of their conversation. In one video shared on Instagram, Prince Harry effuses over a baby milestone — baby Archie's ability to hold his head up! "He's holding his neck up? That's great," Beyoncé can be heard replying to Prince Harry in the video.

Sunday night's appearance was one of Markle’s first outings since giving birth in May; she's also been seen at Wimbledon cheering on BFF Serena Williams and celebrating the Queen's birthday at the Trooping the Colour last month. More recently, Markle cheered on Prince Harry at a charity polo event, with baby Archie in tow, according to TODAY.

Last night's appearance at The Lion King premiere, though, was more than just a night out at the movies; Prince Harry and Markle were also there to meet with representatives from conservation organizations that they work with, according to USA Today.

As part of the promotion for The Lion King, Disney announced an effort called #ProtectThePride, which is "a global conservation campaign to support efforts protecting the rapidly diminishing lion population across Africa," according to a caption posted on the royals' Instagram account from Sunday's event. "This evening Their Royal Highnesses had the pleasure of meeting the cast and creative team behind the film, as well as supporters of @africanparksnetwork, of which the Duke is President,” the caption continued.

What's more, Prince Harry and Markle will be making a trip to Africa soon, according to People, and they’re taking little Archie with them! The Duke and Duchess of Sussex announced on Instagram last month that they'll be visiting South Africa together this upcoming fall, and Prince Harry will also be going solo to Angola, Malawi, and Botswana.

Beyond providing Disney fans with a beautiful and lovely piece of cinema, The Lion King has also inspired much-needed awareness for African wildlife and, of course, brought two incredible couples together for some oh-so-incredible moments.