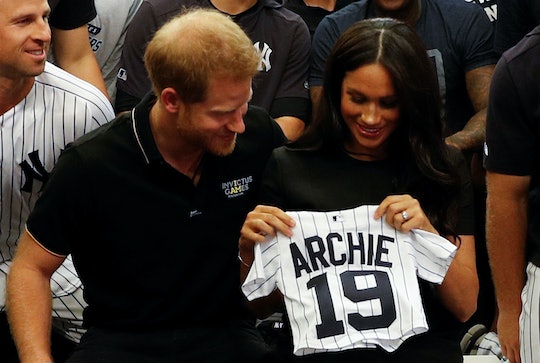 Baby Archie's Future As A Baseball Fan Is Up In The Air (Thanks, Mom)

There is this thing that happens when couples welcome their first baby together where they have to sort of figure out how they might want to pass on their personal heritage to their little one. Each of them thinking about what is important to them about their history, what it was about their past that informed them or whatever. In the case of Meghan Markle and Prince Harry, so far it's pretty much been all royal family all the time. Until Saturday, that is, when Meghan Markle was given the most American gift a person can get for her baby boy Archie. Because Markle is American herself, it stands to reason she would want to pass her heritage down to her little boy.

The Duchess of Sussex made a surprise appearance at Queen Elizabeth Olympic Stadium on Saturday for the opening of the London Series, where the Boston Red Sox were set to play their first game ever across the pond. She was there with her husband Prince Harry to support members of the Invictus Games from the U.S. and the U.K who were on hand to throw out the first pitch of the game between the two rival teams. The Invictus Games are a charity founded by Prince Harry to encourage wounded, injured, or sick members of the Armed Forces or veterans to play in an adaptive, multi-sport event.

Both Prince Harry and Meghan Markle looked to be in fine spirits on Saturday, perhaps because they were both happy to be there supporting a passion. The Invictus Games for Prince Harry, and just general American-ness for Meghan Markle. Who appeared to truly love hanging out with some of her baseball-playing countrymen... especially when they gave her fabulous gifts for her baby boy born on May 6, little Archie.

The New York Yankees offered her a tiny baseball jersey with Archie's name on the back.

Not to be outdone, the Boston Red Sox gave her a small Red Sox onesie that she accepted gratefully. Although in my opinion, she did seem to be a touch more excited about the Yankees jersey. But that could just be me.

The Boston Red Sox did have a pretty special draw to encourage Meghan Markle to feel more affectionately towards them (and so potentially pull the royal family into becoming Sox' fans); it seems Red Sox outfielder Mookie Betts is distantly related to Markle, as was reported by The Boston Globe. When Betts told the Duchess of Sussex about their connection, she gave him a big hug. So maybe the Sox won her over in the end.

Meghan Markle is reportedly quite keen to make sure Archie grows up with a strong connection to his American roots as well as his British roots on his father's side. There have been reports that Markle plans to christen Archie on July 4, Independence Day, as per The Sun, as well as reports that she plans to visit her own country with her son some time down the road.

So sure, getting really into baseball might be a bit of an American cliche. But a royal baby has to start somewhere right?