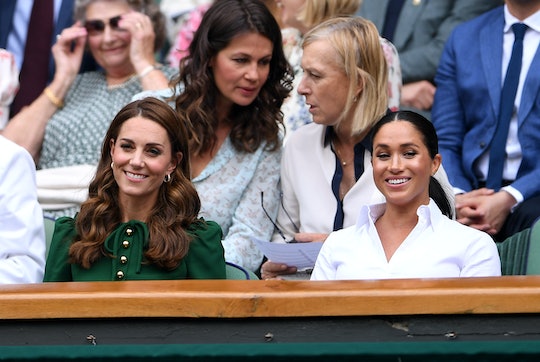 Do you guys remember last year around this time? When the whole world was in love with the Fab Four, also known as Meghan Markle and Kate Middleton plus their husbands Prince Harry and Prince William? This was Before, of course. Before the tabloids got a real bee in their bonnet about a rumored rift between the two couples and pretty much poisoned everything. Well a year has passed. A whole lot has happened. And guess what? Meghan Markle and Kate Middleton are at Wimbledon together in a total flashback to their first outing last year. And it's honestly like none of that other nonsense ever happened.

Last year at this time, Meghan Markle was newly married to Prince Harry when she and her sister-in-law Kate Middleton showed up at the Ladies' Final at Wimbledon for their first official outing sans husbands. It was a glorious moment, with the two women looking chic and happy in the royal box to cheer on Serena Williams, one of Markle's best friends, according to Harper's Bazaar. These were simpler times, when royal watchers might have been hopeful that this budding friendship between the two sisters-in-law would become a regular thing. Before tabloid rumors and unnamed "palace sources" ruined the party for everyone.

Here's just one picture to remind you because I can't even with their outfits.

One full year later a whole lot has changed. Markle and Prince Harry are now parents to delicious 2-month-old baby boy Archie Harrison Mountbatten-Windsor and have moved into their newly renovated home of Frogmore Cottage at Windsor Castle. The two couples have also split their households into Kensington Palace and Sussex Royal, as per TODAY, which had everyone freaking out and assuming they must hate each other. Instead of just thinking that maybe it is too much to ask brothers to work together for the rest of their lives.

But to all those people who think there are massive issues between the two women... please enjoy these pictures of the Duchess of Cambridge and the Duchess of Sussex, joined by Pippa Middleton for the full sister effect, at Wimbledon on Sunday. Having the time of their lives like any other moms on a relaxing afternoon out.

Please note all of the laughter and smiles happening.

The three women were on hand to watch tennis queen and Markle baby shower planner Serena Williams take on Simona Halep from Romania. Halep managed to beat Williams and win her first Wimbledon title ever, reported The Guardian, and everyone seemed to be in good spirits about the outcome. Maybe because they were just so excited to see the two Duchesses out together having a nice time.

While I don't have any insider information about what the three women, all of whom have had babies in the past year (Middleton's youngest son Prince Louis is one while Pippa's son Arthur was born last October, according to Harper's Bazaar), will be doing for the afternoon, I'm hoping they go for a late lunch somewhere. Where they share a charcuterie board with delicious cheeses and then split some sort of chocolate for dessert.

This is the royal narrative I'm here for so goodbye.