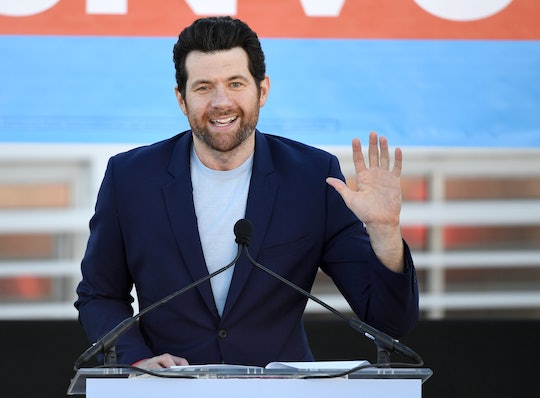 Billy Eichner Is Starring In A Gay Rom-Com, Now Everyone Rejoice

Every once in a while something happens that is so perfect and brilliant and special it makes you believe in a little thing called kismet. It makes you believe that our world might be getting better in some ways and not just exponentially worse and worse all the time. This is how I feel about the news that Billy Eichner will be starring in a gay rom-com that he is writing. Because honestly, how was this not already a thing that was happening?

The Billy On The Street star announced on Tuesday that he is working on a rom-com that will star him and be written by him and will be distributed by Universal Studios (now I can finally forgive Universal for a disappointing visit to its Hollywood theme park six years ago). And as if the news that Eichner will be releasing a gay rom-com isn't exciting enough, Judd Apatow is set to produce the movie and Forgetting Sarah Marshall director Nicholas Stoller will be helming the direction, as per Deadline. For those of you who have watched Billy Eichner's dry, understated turn as Fred Savage's love interest in Netflix's Friends From College, you know how exciting this truly will be. Because Eichner doesn't just have the humor for a rom-com, he also has the acting chops.

Eichner tweeted the news of his upcoming rom-com to his fans on Tuesday, writing:

Excited, terrified, completely in shock and PROUD as hell to announce this movie. We’re making a big, new romantic comedy for Universal!!!! AHHHHHHH!!!

The Emmy-nominated comedian has a history of being passionate about his movie knowledge. In fact, he basically based all of Billy On The Street on pop culture references and movie trivia. All of this is to tell you; he is going to know his stuff when it comes to writing a satisfying rom-com. Eichner's premise for the film is simple and ripe for complications and entanglements (always the hallmark of a good rom-com). As Vulture explained, the untitled film will focus on, "two men who have commitment problems and are attempting a relationship.”

Guess who is ready to sit down and watch this movie based on one partial sentence? Basically everyone on Twitter.

I think everyone is collectively excited about this news on several levels. First of all, there's not exactly a plethora of rom-coms featuring gay male leads in movie theaters right now. In fact, I think you would be hard-pressed to think of many major studio productions of gay rom-coms in general, though there have been a few. So that's something.

But I also get the sense that people are specifically excited for Billy Eichner to be making a film so clearly tailored to his wheelhouse. After years of watching him scream at people that he's frightened of Claire Danes or feels just so-so about Brad Pitt, this is a big moment for him. And luckily for us, Billy Eichner's big moment is going to mean some excellent entertainment for us too.