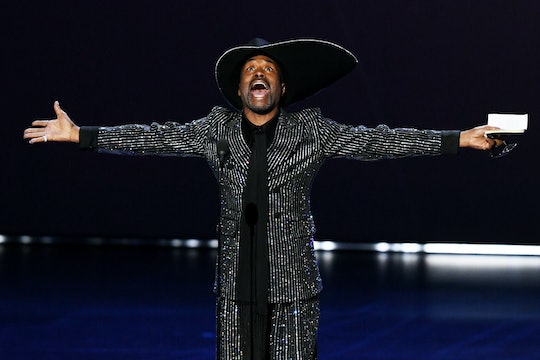 The 2019 Emmys were a real night of firsts. The first time the Emmy Awards aired without a host in several years, although for all the fuss that was made about it I barely even noticed. There was another first that brought the world joy and hope for the future of LGBTQ performers everywhere. Billy Porter made history at the 2019 Emmys as the first openly gay performer to win the Best Actor in a Drama Series, and it was a powerful moment.

Porter beat out seasoned actors like Jason Bateman, Bob Odenkirk, Kit Harrington, and others to win for his role as ballroom emcee Pray Tell in Pose, a series by Ryan Murphy and Steven Canals on FX. While this actor has won a Tony and a Grammy for his work in the past, according to Broadway World, this is the first time he's won an Emmy. It's the first time any openly gay man has won the Best Actor Emmy.

A fact that was not lost on the exuberant actor who took to the stage to accept his award from a joyful Kerry Washington. He was clearly in the moment as he kicked up his heels in a crystal encrusted look with the most impressive statement hat you've ever seen and called out to the cheering crowd, "The category is love, y'all!"

Porter went on to quote James Baldwin at the outset of his historic speech, himself a gay black author and activist whose words appeared to sum up exactly how the actor felt in that moment. He said, "It took many years of vomiting up all the filth I’d been taught about myself, and half-believed, before I was able to walk on the earth as though I had a right to be here."

Porter went on to thank his fellow actors in that category, his friends, his supporters, and director Ryan Murphy, who has made a name for himself as someone who creates roles for the LGBTQ community on a different level. As Porter told The Los Angeles Times earlier this year, it took him a long time to get where he is now.

"[There was] lots of dismissal, dismissive energy surrounding what I do, what I bring, whatever. But a few years prior, I started looking at the landscape and going, ‘Well, who would get me? Who’s in the showrunning position that could get me?’ And Ryan Murphy came up and I just went — Ryan Murphy, and started typing him in my journal, started saying him in my prayers — so when the phone rang, and they said, ‘Ryan Murphy, “Pose,” and it’s set in the LGBTQ ballroom culture,’ I just started laughing," Porter told The Los Angeles Times.

Now the whole world is laughing with him. Because he has found a home and a voice and a calling through his character Pray Tell. And just think about all the people out there who will be inspired by his voice and his journey. This is the future.