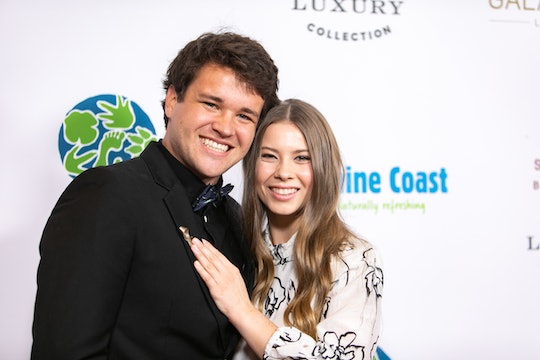 She still has a few more months to go until her daughter is born, but Bindi Irwin's newest pregnancy update revealed a more specific hint about about her due date. Oh, and of course the update featured some exotic animals who are apparently very curious about her growing bump.

Irwin posed with her husband, Chandler Powell, and two giraffes from Australia Zoo in a photo posted on Instagram on Tuesday. The couple matched in all khaki outfits while Irwin rested a hand on her bump. A giraffe named "Forest" also seemed pretty happy to be hanging out alongside the smiley couple.

"Baby bump is getting bigger!" Irwin captioned the photo. "We're getting close to the halfway point and I think our Australia Zoo animal family is excited to meet our daughter next year. Even Forest the giraffe is wondering what's happening!"

While the photo is certainly adorable, this update also revealed a big hint about how far along Irwin is in her pregnancy. Previously, Irwin only revealed that she was due in 2021.

As the most common halfway point during pregnancy is 20 weeks, Irwin could be anywhere from 16 to 19 weeks pregnant right now. Earlier this month Powell revealed that his wife had just entered her second trimester. With all that said, Irwin could give birth to her daughter sometime in March or early April next year.

Both Irwin and Powell work at Australia Zoo, the wildlife park Irwin's grandparents started in the 1970s. So, there is no shortage of furry or scaly friends to hang out with (or take pictures with) during this very exciting time in her life. Caring for wildlife is in her blood, and will surely be in her daughter's too. It's only a matter of time before Irwin and Powell's little girl is running around with the zoo animals featured in her bump photos.