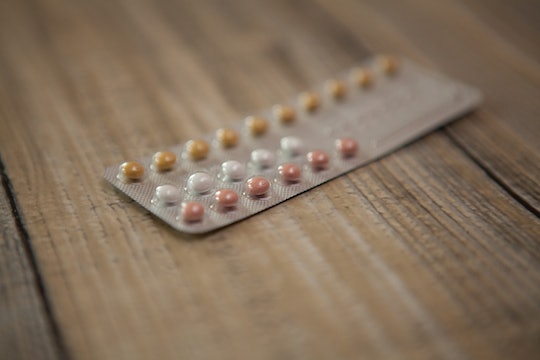 A recent study is just the latest addition to all the literature that says birth control negatively affects women's quality of life. Anyone who's ever used hormonal birth control can likely attest to that, but the more science to back it up, the better. This most recent, randomized study was done by researchers from the Karolinska Institutet in Sweden, who administered either placebos or contraceptive pills with ethinylestradiol and levonorgestrel to 340 women between the ages of 18 and 35 years old. They concluded at the end of three months that women who took the combo pill reported lower self-control, energy, and overall mood. Sounds about right, huh?

There is one silver lining, though. The researchers didn't find that the hormonal birth control increased the risk of depression. It just generally messed with their quality of life, which is at least a little bit better.

The researchers in this most recent study, first published in Fertility and Sterility, noted that 35 percent of both groups had some moderate distress in their overall well-being when they started. Afterwards, 44 percent in the oral contraceptive group reported moderate to severe distress.

The researchers noted that if the study was conducted for a longer period of time, they might have gotten different results, but their conclusions do line up with other studies on the emotional effects of birth control.

Niklas Zethraeus., one of the co-authors of the study, said in a statement:

It might also explain why so many women stop taking the pill after using it for a few months. Actually, 60 percent of women discontinue use of the pill after six months. That means something isn't working for way too many women. And the more women are put off by birth control or not presented with all the options and side effects at the outset, the more vulnerable they are to unintended pregnancies. The more medical professionals and women know about these emotional side effects of birth control and feel comfortable talking about them, the more women can start to make more informed choices about their birth control method. And if you're already prone to depression, it might be worth consulting with your OB-GYN about the different kinds of birth control, and maybe going for something like an IUD or diaphragm instead.

Either way, there are options out there. So if you're one of those women who finds hormonal birth control bringing you down, talk to your doctor and see if there's another way to go. You shouldn't be letting a tiny little pill make life any more stressful than it already is.