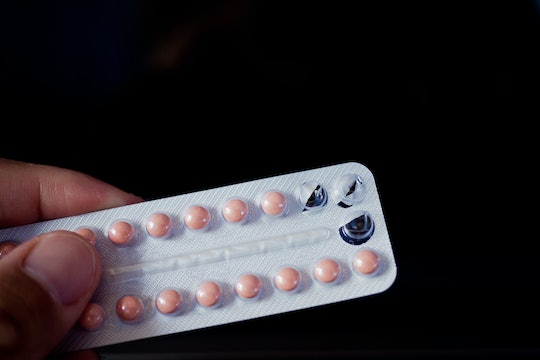 Survey: Men Probably Won't Use Birth Control Pills Because Of The Side Effects

It's no secret that women have to deal with a lot. Sexism in and out of the workplace, the wage gap, childbirth, and yeah, period cramps all work to make being a woman a lot more complicated than being a man. And while modern science has come a long way in helping women take charge of their own health and their own bodies, women are still the only sex who can get pregnant, and for centuries now, the only ones responsible for stopping that from happening. Even now, that birth control pills for men will soon be a reality, they probably won't even take it, as a recent survey found — leaving women to deal with their fair share of responsibility.

While a male birth control pill hasn't been perfected just yet, it's likely to be on the market as soon as 2020, according to Reader's Digest, a new study suggests that even when it does become mainstream, men aren't inclined to be open to taking it.

Why? Well, about 30 percent of men wouldn't want to take birth control, Reader's Digest reported, due to side effects such as "weight gain, mood swings, low energy, and blood clots." You know, the same side effects women face when taking the pill. (Insert eye roll here).

This new research isn't exactly surprising, but it's still unfortunate. The DrEd survey of 1,000 Americans and Europeans focused on safe sex, as well as birth control options, side effects, attitudes, and more. And its findings are actually quite significant. Along with the relatively high number of men who would refuse to try male birth control pills, the research also discovered that "only 26 percent of men would take on the challenge of childbirth," and perhaps unsurprisingly, more American men were more likely to refuse the challenge.

"While 1 in 4 European men were up for the experience, more men in the U.S. did not want anything to do with birthing a child, physics and anatomy aside," according to the survey.

Yet, those three in 10 men would still be hesitant to take the pill if it had the exact same side effects that women's birth control pills do. Of course, no one, male or female, should have to take a pill that puts them at risk of blood cots and increased anxiety or depression, but it's still quite extraordinary that there are so many more birth control options available for women than there are for men.

So, really, more viable birth control options are completely necessary for the majority of Americans.

Hopefully, by the time male birth control pills become available to both genders, men will have a change in attitude about taking them. Because seriously, why should women always have the bear the brunt of sexual housekeeping?