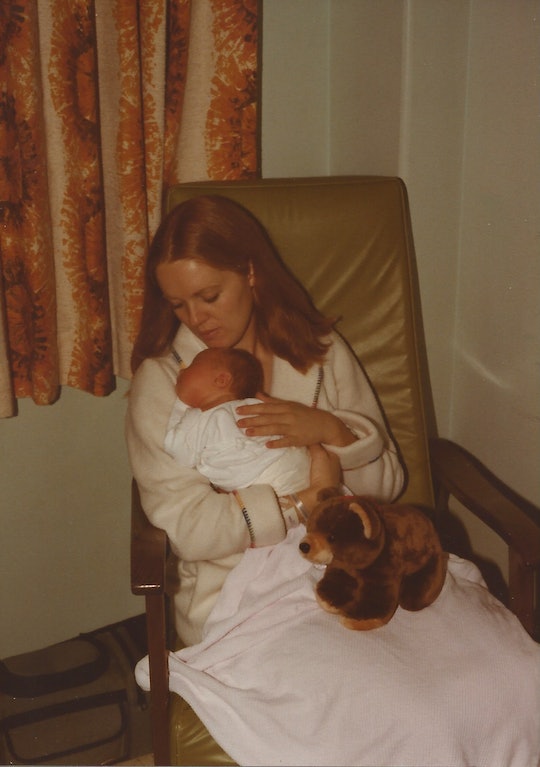 Thirty-seven years have passed since Molly, a mother from Kansas, gave birth to her daughter, but the memories have stuck with her. “As my labor progressed with no baby, my fear increased and any confidence I went in with was completely gone," she tells Romper via email, “I was never allowed out of bed until my labor had gone on for about 14 hours.” For Molly, there is lingering birth trauma over her treatment during the delivery of her daughter decades later. Talk to any number of women, and you find this is a common story; more so, it is intergenerational.

Molly recalls that the room was crowded. She was given some medication to stimulate contractions and was finally wheeled back to the delivery room, “out of my head with fright.” Her daughter was born and was taken right away to be cleaned up. “I could see her, but felt sadness, fear, and worry because they took her. Our baby stayed in the nursery and was brought to our room at designated times,” she said, “There was very little control, if any, over the entire experience.”

Advocating for yourself is hard to do when it’s your first time giving birth, as Marlene, a mother from Minnesota knows. She explains to Romper, “When I was pregnant with my first child, my mom told me that each time her own uterus hadn’t contracted and she lost a lot of blood. I relayed this information at most of my doctor visits and they didn’t seem overly concerned.”

When her daughter was born, there were tears of joy, but those first moments of bonding were marred by something going terribly wrong. “I could tell the doctor was panicking and I didn’t really understand what was happening, but my husband saw all the blood spreading across the floor.” A nurse took her daughter and handed her to Marlene’s husband. He later confessed to Marlene as he was holding their daughter that this was not the way it was supposed to happen. He had never even changed a diaper.

Birth trauma in all its facets, is common, and could affect up to 20-30 percent of births, but has rarely been talked about.

Birth trauma can appear in many forms, sometimes even when it’s not recognized right away. According to The Birth Trauma Association, birth trauma is the manifestation of post-traumatic stress disorder (PTSD) after giving birth and the association also includes women who may not meet that criteria for PTSD, but show some of the symptoms. Birth trauma in all its facets, is common, and could affect up to 20-30 percent of births, but has rarely been talked about, especially years ago where matters of women’s health often weren't dealt with appropriately. Some things that can happen in a delivery that can cause birth trauma include induction, prolonged labor, not being listened to or problems with staff, or traumatic or emergency deliveries.

Vicki, a mother from the midwest endured 24 hours of back labor 37 years ago when she had her first child. “I had to have an emergency C-section because my son never dropped," she tells me. "Back then they didn’t do spinals so I was knocked out for the C-section.” Right after they went home, their son was colicky and Vicki and her husband would spend the next five months pacing the house. “He’s screaming, and I’m crying. Back then they didn’t offer the services like they do now, for any information actually, of what to do, phone numbers you could call. They never gave me anything like that. I just had to deal with it, I guess.”

For mothers who experience a traumatic delivery and symptoms of PTSD even just getting back to the basics of self care —nourishment, hygiene, and sleep — can feel insurmountable.

We talk about how soon a mother can "resume" her life after a baby, but “it is a fallacy to think that there is anything to ‘resume’ after childbirth,” Dr. Rebecca Clendenin, an outpatient psychiatrist with a special interest in maternal mental health at Kaiser Permanente Medical Center in San Francisco, tells Romper via email. “As new mothers, our lives are turned completely upside down and this new relationship is wonderful, bizarre, and terrifying all at the same time. It is rare that this exceptional transition is easy or without difficulty and pain, but for mothers who experience a traumatic delivery and symptoms of PTSD even just getting back to the basics of self care —nourishment, hygiene, and sleep — can feel insurmountable.”

After the birth of her first child, Molly held onto that experience for a long time. “I think that’s all I talked about to other women. I’m sure I talked to my spouse, but I don’t think men really get it. My husband said ‘there is no modesty’ in childbirth.” Molly explained that her baby became her first priority, and her birth experience started to fall away. However, after she became pregnant again she was instantly worried about going through the birth process a second time.

Christina Kocis, a certified nurse midwife and division director of the Stony Brook Midwifery practice in New York, tells Romper that she has women who come to her practice feeling traumatized from their prior birth experiences. “We are seeing them for the second time around. Typically they’re coming to us to try to have a healing experience after a previous traumatic birth. They have feelings of almost loss of the birth experience they had hoped for.”

“As a mom, I was just so wrapped up in taking care of my baby,” Marlene says, “My husband was more affected by it, but I didn’t know that until a week or two later. That’s when it hit me that this was a big deal. I think he felt a little more traumatized. I just didn’t want to go through that again. I wanted the doctors to be more prepared next time.”

When her own daughter was pregnant several years ago, Marlene urged her to make sure she spoke with her OB to warn them this could happen to her daughter as well.

“My whole pregnancy sucked,” Vicki explains, “Between that and the whole birth, that’s kind of the reason I have seven years between my kids.” She laughs. “We were actually going to only have one, because I didn’t want to go through all that again.” Once she started to figure things out with her son, it got better. “I still totally remember it. Several of my coworkers said, Oh you forget that pain, and I said, Like hell you do!” She laughs again, “I remember [my birth] vividly. I still remember, but it’s gotten easier. You don’t let it traumatize you anymore.”

There seems to be a universal theme to healing from traumatic births. Dr. Clendenin offers her view. “There are many paths to resilience and recovery and they can be very different depending on our own experiences and histories. One important predictor of recovery is level of social support. This can include everything from having a helping pair of hands at home to [taking] advantage of postpartum doulas." Others, she says, might be home visits or access to public health nurses and mental health services. "In my hospital system we provide a free support group for mother's dealing with postpartum mood, anxiety and stress.”

The three mothers interviewed by Romper all agree on the same thing: They were lacking support, and were left scarred by what was happening in the process.

Molly found a better experience the second time around, coming into it better able to advocate for herself. “When I started my pre-natal visits back with my first OB, he said the procedure would likely be similar," she says. "Around six months, I found an OB who would support me. I wanted my birthing procedure to be safe for the baby but as long as things were progressing normally I wanted some control in what was taking place. I discussed and wrote down everything I was hoping to have take place. The hospital and my OB honored it to the letter. My second birth was a slam-dunk so to speak. It was completely different than the first experience.”

“I was 26 years old, what did I know?” Marlene says. Her next two births still resulted in hemorrhaging, but it was controlled. When her own daughter was pregnant several years ago, Marlene urged her to make sure she spoke with her OB to warn them this could happen to her daughter as well. “And I’m more vigilant and mindful of that in my [third] daughter now with talking to her doctor. There is obviously a family history of this.”

It can be hard for women to talk about a birth that is not joyous and empowering.

Vicki admits, “The biggest thing I could have used at that time were some resources. When [my son] was colicky, you just wonder what am I doing wrong? It would have been very helpful to know things you can do for them — is it normal and all. You just don’t know.”

Christina Kocis, a certified nurse midwife, says that it can be hard for women to talk about a birth that is not joyous and empowering. “I think women are silent about it because they feel like, What’s the matter with me? Everything I’ve read and seen, so many other people I’ve talked to all say what a great amazing experience they had and how happy they are. So maybe there’s something wrong with me, so I don’t want to tell people about it.”

“Having a partner or supportive family that will help care for the infant in order to allow Mom to get at least six hours sleep can be invaluable,” said Dr. Clendenin, “For mothers who find themselves suffering from changes in mood and anxiety following traumatic childbirth we often employ trauma focused therapies such as EMDR or TFCBT. [Health care providers] may recommend medications to help with symptoms in some women. Alternative treatments like yoga, meditation and exercise are well known to help alleviate and augment treatment for PTSD. And there is a great free app developed by the VA called PTSD Coach that can be helpful for anyone struggling with symptoms following trauma.”

“I hope women come to understand how common traumatic births are," she says, "and that they find someone in their life to talk with about their struggle.”

More Like This
Mom Gives Birth To Record-Breaking 16-Pound Baby
Diastasis Recti Exercises You Can Do At Home To Heal Your Abdomen
Dealing With Postpartum Back Pain? Physical Therapists Share Their Tips
Weed Moms Are Changing The Culture Around Marijuana
What Parents Are Talking About — Delivered Straight To Your Inbox