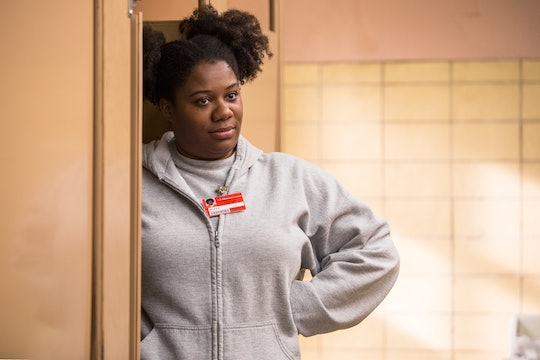 With so many different Netflix Original shows being released these days, it’s a wonder that some of them in the same genre haven't had many crossover episodes, which is why Black Cindy's cameo on Unbreakable Kimmy Schmidt was perfectly timed and kind of amazing. For those of you unfamiliar with the character, Black Cindy aka Cindy Hayes, is one of the Litchfield prison inmates who stars on Orange Is the New Black. So you can imagine everyone's surprise to see her show up in Kimmy Schmidt's world, though it was certainly in the most clever way possible.

When Gretchen was arrested after failing to successfully establish her own cult of followers (made up entirely of teenage boys), the end of Season 3 Episode 5 saw her getting off a prison transport bus and the exterior of the buildings looked weirdly familiar. Then she turned to talk to someone who also looked very familiar, and it suddenly became clear that the prison was definitely Litchfield in an epic crossover moment we never knew we always wanted. It also gave viewers of both shows a possible reason for why Cindy Hayes was given her nickname in the first place — perhaps long before the events of Orange Is the New Black began.

If you remember, Gretchen and Kimmy’s other fellow mole woman from the bunker besides Donna Maria was Cyndee. So for Gretchen to call Black Cindy by that nickname brought the crossover to a whole other Inception-like level. The scene was obviously meant as a treat to fans of both shows and since it showed Black Cindy arriving at prison, it will likely have nothing to do with the new season of Orange Is the New Black, but it was the kind of crossover of the two shows that really strangely worked.

Since Orange Is the New Black and Unbreakable Kimmy Schmidt are both Netflix comedies (with some more drama thrown into the former), the mashup was an epic surprise but one that felt totally plausible. Granted, Cindy was the only OITNB character to appear in the very brief scene, but it was enough for me to want a full-on crossover episode dedicated entirely to Gretchen's time in Litchfield prison. (Please?)

Obviously the mashup between the two shows and Black Cindy’s cameo on Unbreakable Kimmy Schmidt isn’t meant to be taken too seriously, but it was still the perfect time for it (a few weeks prior to the Orange Is The New Black Season 5 premiere) and successful put a smile on every viewer's face.