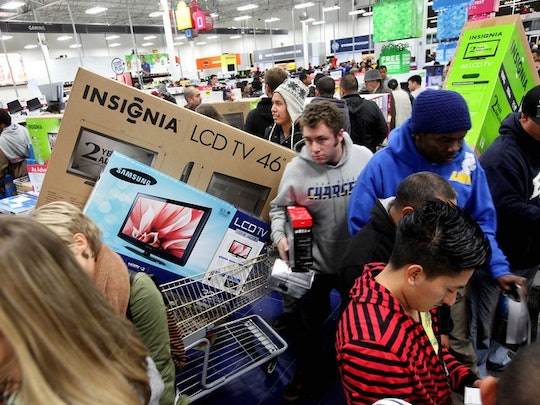 According to a recent survey by Harris Poll on behalf of Fusion Ops, people are apparently awful. OK, there’s a little more to it than that. By “people” I mean “parents,” and specifically on Black Friday. When parents with kids under 18 were asked if they’d be “willing to play dirty” in order to get the last hot holiday gift, 37 percent said yes. So what does playing dirty entail, exactly? Well, 17 percent said that they would lie to other shoppers. Sixteen percent would cut in line. percent would pretend to be a store employee. Wait, wait, it gets worse! A lot worse! Eight percent would knock down an adult, and another (probably the same?) 8 percent are also willing to knock down a child! An additional 7 percent would trip an elderly person.

The questions were asked of parents of grown kids and adults without children, as well, and apparently, we tot-wranglers are far and away the most terrible people on Black Friday. Why are we so willing to hurt our fellow man in order to appease our children? Turns out 44 percent of us live in fear of temper tantrums, 31 percent think missing out on the perfect gift could ruin Christmas (nah, Starbucks already did that), and 10 percent think their kid might run away if they don’t get a Millennium Falcon drone under the tree this year. I know we’re not supposed to be judging other parents, but can I, just this once? Can I please?

Black Friday shoppers are the worst humanity has to offer (in my opinion, of course, of course). I myself worked Black Friday in a big box store back in the early aughts, right when it was starting to become A Thing. My job was simply to stand in the middle of the store, dead center, and wait for people to ask me questions. But what they were more interested in was stomping on my feet and ramming me with shopping carts. I ended up spending my shift standing on a shelf for my own protection.

Black Friday is no joke; people die at these things. In 2008, Walmart shoppers broke down a door and trampled three people to death. That same year, a shooting at Toys R Us claimed two lives. In 2011, a California woman pepper sprayed ten people over video games (also at Wal-Mart; these things usually happen at a Wal-Mart).

Can we stop this madness? Please? A lot of Black Friday deals aren’t even really deals; that $200 flat screen usually turns out to be some no-name brand that breaks within a year. As for the rest of the merch, if you’re reading this, I assume you have an Internet connection. Have you heard of Cyber Monday? Rather than standing outside Best Buy in the cold at 3 am with a belly full of turkey, you can have a relaxing weekend, show up to work on Monday, and just order everything online for the same prices. Not that I condone time theft at work, obviously.

Beyond the deals, though, it seems like the real nature of Black Friday revealed by this survey is that we’re all raising entitled monsters who would rather have us risk getting shot at a mall than make them cry, and that’s a problem. How do we fix it? Don’t ask me; I’m too busy trying to get $20 off Lego Dimensions.