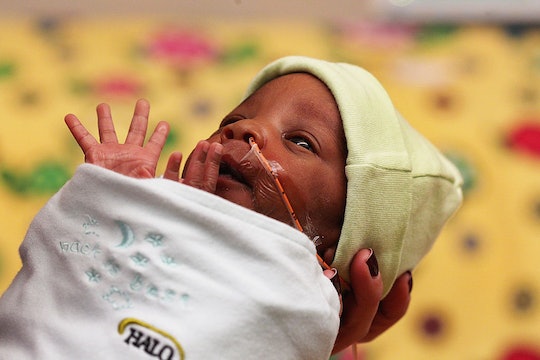 When my son was born, he had severe hydronephrosis — fluid on the kidneys — and was quickly transported to the Neonatal Intensive Care Unit (NICU). Like any parent, I hoped he would receive the best possible care in a critical setting. But a recent study has found disparities in treatment of Black infants in the NICU.

The study, "Racial Segregation and Inequality in the Neonatal Intensive Care Unit for Very Low-Birth-Weight and Very Preterm Infants," conducted in connection with data from the Vermont Oxford Network and published March 25 in JAMA Pediatrics, found evidence of de facto segregation of infants, with Black infants receiving treatment in hospitals with poorer quality of care. The implications are profound: the infant mortality rate for Black infants is 2.2 times that of non-Hispanic white infants; African-American infants with low birth weight are 3.2 times more likely to die from associated complications, per CDC data from 2017.

Dr. Elizabeth Howell, Director, Blavatnik Family Women’s Health Research Institute, Icahn School of Medicine at Mount Sinai, wrote an accompanying editorial on the study in JAMA Pediatrics, claiming that 40 percent of the Black-white racial disparity in preterm neonatal mortality rates can be explained by segregation and inequality of care in NICUs across the U.S. Essentially, poor and minority families are concentrated in areas of the country around lower-quality hospitals, increasing risks to the baby's health in the short and long term, and exacerbating socioeconomic discrepancies.

After the regions in the United States were given scores based on their medical care, they found that 76 percent of Black infants were located in regions with the lowest scores.

The researchers sat out to find how pervasive the segregation and inequality for very low birth-weight and very preterm infants is in NICUs across the United States.

And their findings were disappointing, however, not shocking.

The data found that nonwhite infants are most often seen at separate hospitals from white infants. In addition to being racially segregated, it seems the hospitals at which Black infants receive care are of a lower quality. After the regions in the United States were given scores based on their medical care, they found that 76 percent of Black infants were located in regions with the lowest scores.

The study came to two important conclusions: Black and Hispanic infants born very preterm are more likely to be born at hospitals with worse outcomes, and Asian infants at better hospitals. And region plays a role in NICU quality but cannot completely explain care disparities.

Previous research has shown the ways quality of care correlates with discrimination in a wide range of areas. For Black Americans, segregation is often reflective of inequity in employment, education, and even life expectancy.

According to Dr. Howell, these NICU inequities are reflective of larger healthcare trends.

“There are a number of studies that have documented that black patients tend to receive care in a concentrated set of hospitals and these hospitals often have poorer quality of care. This has been found in a number of areas in medicine (e.g., stroke, heart attack, obstetrics, and others),” Howell tells Romper by email.

“Quality of care provided for birthing experience has implications for two lives and contributes to the transmission of disparities from one generation to the next,” Howell explains.

Interestingly, a growing body of research suggests that Black Americans also face an increased likelihood for being seen at some of the most expensive hospitals in the United States.

They are primarily located in the South — a region with particularly high concentrations of Black folks — and typically for-profit instead of academic facilities.

Howell is adamant that we must continue to research segregation as well as inequality of NICUs to better understand how they impact newborn health. “Disparities in quality of care have a major impact on the health of the newborn, especially for the babies born very prematurely.”

Later neurodevelopmental impairments... place these infants at a disadvantage over the life course and perpetuate health and socioeconomic disparities."

Despite a wide range of potential causes (insurance, distance from care, and specialist referrals, to name a few), Howell reminds us that we lack a definite answer answer as to why moms of color, especially Black women, often end up delivering in lower performing hospitals.

Howell suggests that the public be cognizant of racial disparities in medical treatment, particularly as it relates to NICU infants because of the potential lifelong impact.

“Disparities in quality of care for these infants can have an impact on both short and long term outcomes," she says. "For example, disparities in early severe neonatal morbidities among babies born very prematurely are associated with later neurodevelopmental impairments, which place these infants at a disadvantage over the life course and perpetuate health and socioeconomic disparities,” she explains.

In our case, we live in a rural area with limited access to healthcare. We already had to drive two hours to find a hospital capable of handling my son’s needs. I can’t imagine how detrimental it would have been to travel that far and receive expensive low quality care — especially without insurance!

Studies that increase our awareness of differences in treatment across racial groups in the health care industry are invaluable. However, it’s challenging not to wonder why Native infants were excluded as a data set. One could only imagine what the data could have revealed about the continued experiences of Native Americans, as they often face racial disparities at rates comparable to Black Americans.

Similarly, the researchers pointed out that a limitation of their study was not breaking Asian or Hispanic individuals into sub-ethnicities. Having done so could have substantial impact of findings.

As we work to end health inequities, we must be mindful of the obstacles that lay ahead of us. But it is heartbreaking to know that discrimination in the health care system can begin so early in life.

Thankfully, my son was only in the NICU for about a week, but for many children and parents with serious health conditions, have a very low birth weight, or who were born pre-term, it becomes a second home. The NICU experience can take a toll on parents — it did for me. Worrying that your child will receive the care he needs is already a burden, without worrying that the quality of care won't be good enough.